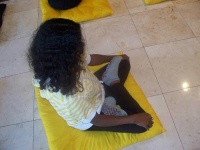 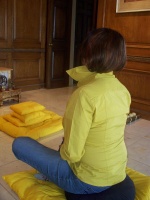 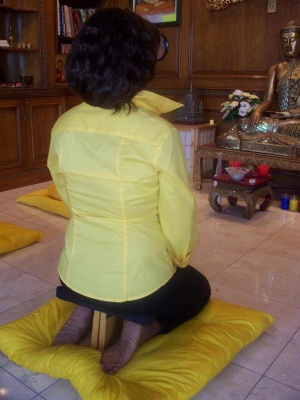 Kneeling position on a kneeling bench 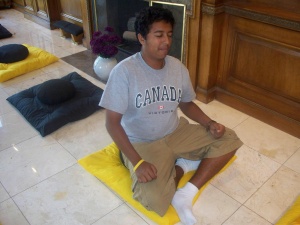 A posture (iriyapatha) is a position the body is held in. The Buddhist scriptures frequently speak of four postures – walking (gacchanta), standing (thita), sitting (nisinna) and lying down (sayana, M.I,57). The significance of posture in Buddhism pertains mainly to the practise of meditation. During the preliminary stages of meditation the Buddha recommended (M.I,56) that one sit (nisidati), with the legs crossed (pallankam) and the back straight (uju kayam). Most people find it helpful to put a pillow under their buttocks, place their hands either in their lap or on their knees and close their eyes. Some meditators might find it suits them better to sit on a chair rather than on the floor. The Visuddhimagga makes the helpful suggestion that meditators should try different postures for three days each and then decide on the one that is most comfortable for them (Vis.128). The two most important aspects of good meditation posture are (1) that the back be straight without being rigid so as to facilitate clear breathing, and (2) that the body be relaxed and comfortable so that discomfort does not become a distraction (S.V,156).

Those whose goal is to develop mindfulness, should do so with a regimen of regular sitting practise. However, after their mindfulness has been strengthened, it is necessary to then try to broaden it by becoming mindful during all activities, i.e. while in any of the four postures. The Buddha said: "A monk has full awareness while coming and going, while reaching out his hands or drawing them back, while putting on his robes and carrying his bowl, while eating and drinking, chewing and tasting, even while defecating and urinating. He has full awareness while walking, standing and sitting, while falling to sleep and waking up, while talking and remaining silent" (M.I,57).

Choose a posture that is comfortable to sit in for 45 minutes to an hour. Do not force yourself to sit in one of the lotus postures if it is too painful. “If pain was our goal we would be sitting on a bed of nails.” (S.N. Goenka quoted in Hart)

Pain is one of the meditator’s chief obstacles, so don’t encourage it. Acceptable postures include full, half, and quarter lotus, American Indian, Burmese, kneeling, or in a chair. The goal of practice is to obtain mindfulness / awareness / equanimity during everyday life, 24 hours a day, every day. Thus, eventually there will be mindfulness / awareness / equanimity even when we are not sitting, when we are working, eating, walking, etc. Therefore, clinging to a particular posture as the “one and only right way” is not necessary.

In Theravada (includes Vipassana) meditation, the eyes are closed. This helps to center our awareness and attention inward. But if you need to open your eyes to feel more centered, this is okay too. It is not uncommon to sometimes feel that you are falling or leaning one way or the other and the simple solution is to open your eyes slightly until the feeling dissipates. While the eyes are open it is best to have a relaxed gaze about 2 meters (6 to 7 feet) in front of you toward the floor and your eyes are relaxed and not straining.

Virtually any type of clothing is acceptable, but most prefer flexible clothing for the cross-legged positions. Theravada Buddhists do not wear robes during meditation sessions and can wear whatever they like. See: Clothes & fashion and Buddhist fashion

You may place your hands in your lap or wherever is comfortable. The point is to be relaxed and not in a tense position with the legs, hands, or the body. A common placement of hands that is popular is to put your right hand, palm up, under your left hand, palm up, and have the thumbs lightly touching each other.