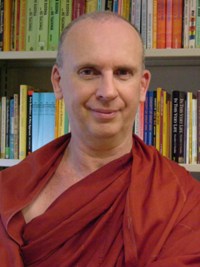 Bhante Shravasti Dhammika (1951- ) was born in Australia and took his lower ordination as a Theravada monk in India in 1976. He has written over 35 books, many of which are available online at no cost. Bhante lived and taught in Sri Lanka and later in Singapore where he was spiritual advisor to the Buddha Dhamma Mandala Society. Bhante’s small book Good Question, Good Answer, now a minor modern Buddhist classic, has been translated into 38 languages. He has also written extensively on pilgrimage in Buddhism – Middle land Middle Way, A Pilgrim’s Guide to the Buddha’s India; Sacred Island, A Buddhist’s Pilgrim’s Guide to Sri Lanka; Guide to Bodh Gaya; Mt. Kailash, A Pilgrims Companion; and A Guide to Borobudur. Bhante Dhammika has offered keen insights into the adaption of the Dhamma into the West, calling for what he has dubbed a "Buddhayana" as an alternative to the ‘yanas’ prevailing in Asia. After 45 years in Asia he moved back to Australia in 2017 where he lives in semi-retirement and continues to write.