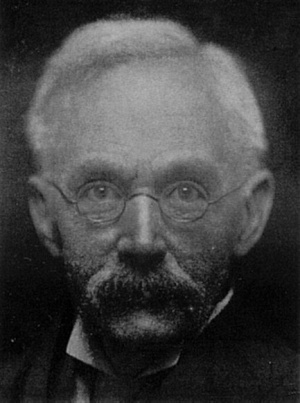 Thomas William Rhys Davids was born in Colchester, the eldest son of a Welsh Congregational minister who was affectionately referred to as the Bishop of Essex. His mother, who died at the age of 37 following childbirth; had run the Sunday school attached to his father's church.

T. W. Rhys Davids was well educated in Latin at school. Deciding on the Civil Service, he studied Sanskrit under A.F. Stenzler (a distinguished scholar at the University of Breslau, Germany, from 1833 till 1868). There, he earned money by teaching English. He returned to England in 1863 and, passing his civil service exams, he was posted to Ceylon. As Magistrate of Galle, a case was brought before Rhys Davids involving questions of ecclesiastical law, and he first came across Pali when a document in a strange language was brought up as evidence.

In 1871 he was posted as Assistant Government Agent of Nuwarakalaviya of which Anuradhapura was the administrative centre, where the Governor was Sir Hercules Robinson. Robinson founded the Archaeological Commission in 1868.

Rhys Davids became involved with the excavation of the ancient Sinhalese city of Anuradhapura, which had been abandoned after an invasion in 993. He began to collect inscriptions and manuscripts, and from 1870-1872 wrote a series of articles for the Ceylon branch of the Royal Asiatic Society Journal about them. During this time Rhys Davids learned the local language and spent time with the people of the area.

His civil service career, along with his residence in Sri Lanka, came to an abrupt end: personal differences with his superior, C. W. Twynham, seem to have inspired a formal investigation, resulting in the holding of a tribunal and dismissal for misconduct. A variety of minor offences had been discovered by the investigation, as well as several significant grievances concerning fines improperly exacted both from Davids' local subjects and his employees. He then studied for the bar and briefly practised law, although he continued to publish articles about Sri Lankan inscriptions and translations, most notably in Max Müller's monumental Sacred Books of the East.

Davids attempted various methods to promote Theravada Buddhism and Pāli scholarship in England. He actively lobbied the government (in co-operation with the Asiatic Society of Great Britain) to expand funding for the study of Indian languages and literature, advancing numerous arguments (in writing and in lectures) as to how this would strengthen imperial England's grip on India. His attempts to increase general public interest among Britons included numerous "Historical Lectures" and papers advancing a racialist theory of the common "Aryan" ethnicity of the people of England, Sri Lanka, and the Buddha's own tribe in times gone by. These views are comparable to the racial theories of Max Müller, but were used to a different purpose; Davids tried to establish that Britons would have a natural, "racial" affinity with Buddhist doctrine. This aspect of Davids' career has been criticized.

He married Caroline Augusta Foley, a noted Pāli scholar in her own right, in 1894. Unlike his wife, Davids was a lifelong critic and opponent of Theosophy.

Thomas and Caroline had three children, the eldest of whom, Vivien; was involved in the Girl Guide movement and an acquaintance of Robert Baden-Powell. The couple's only son Arthur Rhys Davids, was a member of the Royal Flying Corps in World War I.