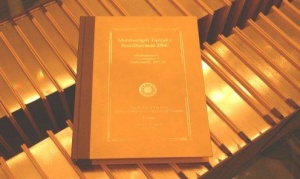 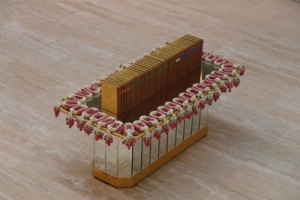 The complete Tipitaka is 40 volumes long

Tipitaka (Tripitaka in Sanskrit) is the name given to the Buddhist sacred scriptures and is made up of two words; ti meaning ‘three’ and pitaka meaning ‘basket.’ The word basket was given to these writings because they were orally transmitted for some centuries (from about 483 BCE), the way a basket of earth at a construction site might be relayed from the head of one worker to another. It was written on palm leaves in the Pali language around 100 BCE. The three parts of the Tipitaka are the Sutta Pitaka, the Vinaya Pitaka and the Abhidhamma Pitaka. The Tipitaka was composed in the Pali language and takes up more than forty volumes in an English translation, roughly about 20,000 pages. It is the largest sacred book of any of the great world religions.

It is also known as the Pali Canon since the language is in Pali and to better differentiate it from the Mahayana Tripitaka (only one letter difference).

A. Mahavagga in addition to rules of conduct and etiquette for the Sangha, this section contains several important sutta-like texts, including an account of the period immediately following the Buddha's Awakening, his first sermons to the group of five monks, and stories of how some of his great disciples joined the Sangha and themselves attained Awakening. B. Cullavagga an elaboration of the bhikkhus' etiquette and duties, as well as the rules and procedures for addressing offences that may be committed within the Sangha.

The Tipitaka on Dhamma Wiki