From Dhamma Wiki
Jump to navigation Jump to search
Listen to this human-read article
http://www.dhammawiki.com/uploads/4_Brahma_Viharas.mp3
Not working? Download this player

The four Brahma Viharas are considered by Buddhism to be the four highest emotions. The word brahma literally means ‘highest’ or ‘superior.’ It is also the name given to the supreme god in Hinduism during the Buddha’s time. Vihàra means ‘to dwell’, ‘to live’ or ‘to abide.’ Thus the Brahma Vihàras are not emotions one occasionally feels but those that one ‘lives in’ and ‘lives by’ all the time. These four Brahma Vihàras are loving-kindness, compassion, (vicarious) sympathetic joy, and equanimity. They can be understood from several different perspectives – as four related but separate qualities or perhaps better, as four different ways the spiritually mature person relates to others according to their situation. So for example, we relate to friendly people with love, to those in distress with compassion, to the successful with vicarious joy and to unpleasant people with equanimity. The purpose of the practice called Loving Kindness meditation is to encourage and nurture the Brahma Vihàras.

The Brahma Viharas are also known as the Four Divine Emotions or The Four Divine Abodes. They are the meditative states, thoughts, and actions to be cultivated in Buddhist meditation. They are the positive emotions and states that are productive and helpful to anyone of any religion or even to the one with no religion. The result will be a very nice and good person, free from hate and ill-will. Those who cultivate the brahma viharas are guaranteed to happiness. Those who further cultivate equanimity, may reach insightful states and wisdom of enlightenment experiences.

The Four Divine Emotions are known in Pali as the Brahma-viharas and are also known as the divine abidings or the divine abodes. They are emotional states to be strived for.By practicing and developing the divine emotions, we will have a peaceful and patient daily life practice.

Metta (loving-kindness) is a soft, affection and care for others and yourself.It is not a hard, romantic type of love and not a love that includes extreme attachment or controlling feelings.

Karuna (compassion) is like an open heart that cares for everyone. It includes empathy, being able to see the other person’s position and caring for and about them.

Mudita (joy with others), sometimes is called sympathetic joy or appreciative joy. It is the ability to be happy when you see others happy. Their joy becomes your joy as you welcome less suffering and happiness of others.

Upekkha (equanimity) is the balanced state of mind. It is the middle way state of mind that is neither clinging nor pushing away. 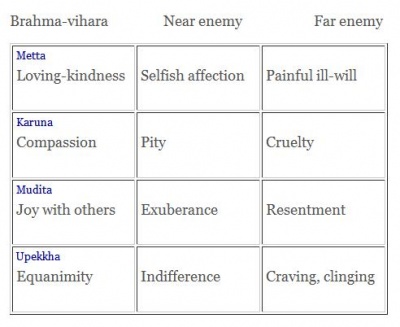 The Four Supreme Efforts and the Four Divine Emotions, like much of the Buddha’s teachings, could be summarized to the following two words: emotional intelligence.

In 1995, Daniel Goleman, published the best-seller, Emotional Intelligence.In this book he showed that more than intellectual intelligence, such as I.Q., what is a far greater scale of a person’s success is how well they deal with social and emotional issues. Emotional intelligence refers to getting along with others, knowing how and when to act, not letting things bother you, and success features, such as persistence, determination, and deferred gratification.

Dr. Goleman provides references from many studies to show the importance of the emotional skills for success. He explains how even residual amounts of anger (which some people feel are necessary to get the anger “off your chest”) leads to further, escalated anger. A person even with a small amount of anger can enter a “flooding” state, where there is an overwhelming amount of anger with adrenaline, where no rational decisions can be made in this state and it needs a long recovery time before settling down.Many people who have killed loved ones report that they “just snapped” in the heat of some arguments.(Goleman, 1995)

Dr. Goleman writes near the end of his book:

“Great spiritual leaders, like Buddha and Jesus, have touched their disciples’ hearts by speaking in the language of emotion, teaching in parables, fables, and stories.Indeed, religious symbol and ritual makes little sense from the rational point of view;it is couched in the vernacular of the heart.” (Goleman, 1995)