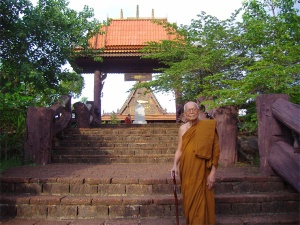 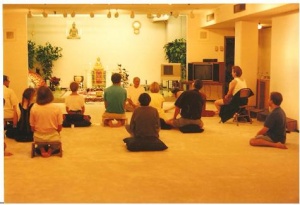 Achan giving a talk at a Dhamma center in Denver opened by Dr. David Snyder

Achan Sobin S. Namto (1932 - ) is a Buddhist monk who has has taught Vipassana meditation and Buddhist psychology in Southeast Asia and North America for over 50 years.

Born in Thailand in 1932, Sobin S. Namto became a novice monk in 1949 at Wat Maha Dhatu in Bangkok, under Abbot Somdej Phra Budthacharn, and began his study of Vipassana there. He was sent to Rangoon, Myanmar (Burma), for further study and then taught in Thailand. In 1960-62 he taught in Luang Prabang, Laos. Returning to Thailand, he resumed teaching and founded the Vidhayakorn Institute in Southern Thailand. He was one of the monks selected to establish the first Thai temple in Los Angeles, California and was appointed its first Abbot.

He was also the founder-Abbot of a Vipassana temple in Denver, Colorado. In 1980 he disrobed temporarily, but continued to teach the Dhamma in the U.S., Canada, and Mexico. He resided at Vipassana Towers in Denver and taught at the Dhamma center there which was founded by Dr. David N. Snyder.

After many years of teaching in North America, he returned to teach at the wat in his home village Wangplado, in Borabu, Maha Sarakham province, North-East Thailand. Achan Sobin is the author of three books on vipassana meditation in English, as well as a book on Buddhist ordination.