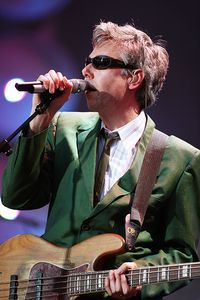 Yauch, an only child, was born in Brooklyn, New York. He is of Jewish descent. He learned to play the bass, and played his first show with the Beastie Boys — then still playing hardcore punk in the vein of Reagan Youth; on his 17th birthday, while still attending Edward R. Murrow High School in the Midwood neighborhood of Brooklyn. He attended Bard College before dropping out. By the time Yauch was 22, producer Rick Rubin had taken the Beastie Boys under his wing and they had released their first album on Def Jam Records as a hip hop trio.

Although he has Jewish roots, Yauch has accepted Buddhism. He is actively involved with the Free Tibet movement, an organisation created to put pressure on the People's Republic of China to respect human rights in Tibet. Funds for the cause were also generated from the royalties to Buddhist-inspired Beasties tracks like "Bodhisattva Vow". In 1996, Yauch helped organize the first Tibetan Freedom Concert in San Francisco, California.

He and his wife, Dechen Wangdu, had a daughter, Tenzin Losel, in 1998.

In 2009, Yauch was diagnosed and treated for a cancerous parotid gland and a lymph node and underwent surgery and radiation therapy. Yauch died at age 47 on May 4, 2012.