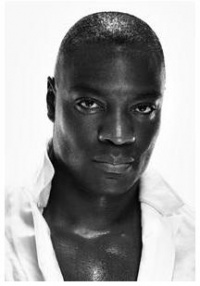 Adewale Akinnuoye-Agbaje (born 22 August 1967) is a Nigerian–English actor, and former fashion model best known for his roles as Mr. Eko on Lost, Simon Adebisi on Oz and Nykwana Wombosi in The Bourne Identity.

Akinnuoye-Agbaje was born in Islington, London, the son of Nigerian immigrants of Yoruba origin.

His best known acting roles have been as the imposing convict Simon Adebisi in the 1990s HBO prison series Oz, and as Mr. Eko on ABC's survivor drama Lost. He has numerous film credits since he began acting in 1994 and has appeared in many top movies, including The Bourne Identity, in which he played a deposed African dictator, Hitu the police officer in Ace Ventura: When Nature Calls, Lock-Nah in The Mummy Returns, and Heavy Duty in G.I. Joe: The Rise of Cobra.

Akinnuoye-Agbaje has also stated that he will be directing a movie about his life story. More recently, he has guest starred in the second episode of season 8 of Monk, and he has been cast as the character Derek Jameson in the 2011 film The Thing.

Akinnuoye-Agbaje is a Buddhist, a member of Sōka Gakkai International.