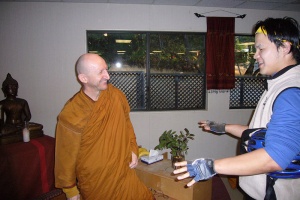 Ajahn Amaro on the left

Ajahn Amaro (born 1956), born Jeremy Horner in Kent, England, is co-abbot of Abhayagiri Buddhist Monastery in Redwood Valley, California, a center for monastic training and for ordinary lay people to practice in the Thai Forest Tradition. His co-abbot at the monastery is Ajahn Pasanno.

Jeremy Horner, as he then was, went to school at Sutton Valence. In 1978, having completed studies in psychology and physiology at Bedford College, University of London, he then traveled to northeast Thailand where he entered Wat Pah Nanachat as an anagarika (lay renunciate). Four months later Horner became a samanera (novice monk), and in 1979 he took profession as a Theravada bhikkhu, receiving upasampada from Ajahn Chah. He remained in Thailand for two years, and then returned to England to help Ajahn Sumedho establish Chithurst Monastery in West Sussex. With the permission of the latter, in 1983 he moved to Harnham Vihara in Northumberland, making the entire 830-mile journey on foot. He chronicled the trek in his 1984 volume Tudong: The Long Road North.

In the early 1990s Amaro made several trips to northern California on teaching engagements. Many who attended his meditation retreats became enthusiastic about the possibility of establishing a permanent monastic community in the area. Meanwhile, in 1995, Amaravati Monastery, his mother house back in England, received a generous donation of land in Mendocino County from Chan Master Hsuan Hua, founder of the City of Ten Thousand Buddhas in Talmage. The land was allocated to establish a forest retreat and, since for some years Ajahn Sumedho had venerated the Chinese master, both abbots hoped that, amongst its other virtues, it would serve as a bond between the otherwise distinct Theravada and Mahayana lineages. Care for the centre was placed in the hands of a group of lay practitioners known as the Sanghapala Foundation. A year later it duly became the Abhayagiri Buddhist Monastery when it was opened on June 1st, 1996.