Difference between revisions of "Ajahn Brahm" 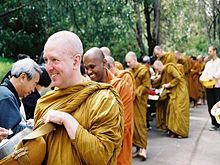 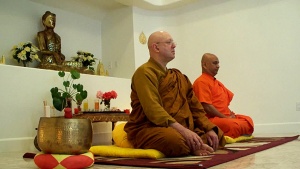 Ajahn Brahm came from a working-class background and won a scholarship to study Theoretical Physics at Cambridge University in the late 1960s. After graduating from Cambridge he taught in high school for one year before travelling to Thailand to become a monk and train with the Venerable Ajahn Chah Bodhinyana Mahathera.

Ajahn Brahm was ordained in Bangkok at the age of twenty-three by the Abbot of Wat Saket. He subsequently spent nine years studying and training in the forest meditation tradition under Venerable Ajahn Chah.

The then Ven. Brahm was invited to Perth, Australia by the Buddhist Society of Western Australia to assist Ajahn Jagaro in teaching duties. Initially they both lived in an old house in the suburb of North Perth, but in late 1983 purchased 97 acres (393,000 m²) of rural and forested land in the hills of Serpentine south of Perth. The land was to become Bodhinyana Monastery (named after their teacher, Ajahn Chah Bodhinyana). Bodhinyana was to become the first dedicated Buddhist monastery in the Southern Hemisphere and is today the largest community of Buddhist monks in Australia.

Initially there were no buildings on the land, and as there were only a few Buddhists in Perth at this time, and little funding, the monks themselves began building to save money. Ajahn Brahm learnt plumbing and brick-laying and built many of the current buildings himself.

In 1994, Ajahn Jagaro took a sabbatical leave from Western Australia and disrobed a year later. Left in charge, Ajahn Brahm took on the role and was soon being invited to provide his teachings in other parts of Australia and South-East Asia. He has been a speaker at the International Buddhist Summit in Phnom Penh in 2002, and at three Global Conferences on Buddhism. He also dedicates time and attention to the sick and dying, those in prison or ill with cancer, people wanting to learn to meditate, and also to his Sangha of monks at Bodhinyana.

Ajahn Brahm has also been influential in establishing Dhammasara Nuns' Monastery at Gidgegannup in the hills north-east of Perth to be a wholly independent monastery, where the Sri Lankan trained, Australian nun Ajahn Sr. Vayama is currently abbot.

Whilst still a junior monk, Ajahn Brahm was asked to undertake the compilation of an English-language guide to the Buddhist monastic code - the vinaya - which later became the basis for monastic discipline in many Theravadan monasteries in Western countries.

In October 2004, Ajahn Brahm was awarded the John Curtin Medal for his vision, leadership and service to the Australian community by Curtin University. He is currently working with monks and nuns of all Buddhist traditions to establish the Australian Sangha Association.

Ajahn Brahm was instrumental in the reinstatement of the bhikkhuni ordination line in Theravada Buddhism. On 22 October 2009 Ajahn Brahm facilitated an ordination ceremony for bhikkhunis where four female Buddhists, Venerable Ajahn Vayama, and Venerables Nirodha, Seri and Hasapanna, were ordained into the Western Theravada bhikkhuni sangha. The ordination ceremony took place at Ajahn Brahm's Bodhinyana Monastery at Serpentine (near Perth, WA), Australia. For his actions of 22 October 2009, on 1 November 2009, at a meeting of senior members of the Thai monastic sangha, held at Wat Pah Pong, Ubon Ratchathani, Thailand, Brahm was removed from affiliation with the main monastery in Thailand, Wat Pah Pong. Since that time, numerous other bhikkhuni ordinations have occurred and the debate is waning as acceptance appears to have caught on among many Buddhists.