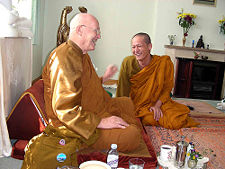 Luang Por Ajahn Sumedho (born Robert Jackman, July 27, 1934, Seattle) is the most senior representative of the Thai Forest Tradition of Theravada Buddhism in the West. The word "Ajahn" is not a proper name, but a title which means "Teacher" in Thai. He is also affectionately known among his students as "หลวงพ่อ" (Luang Por) which means "Venerable Father" in Thai. He has been an ordained bhikkhu for 40 years and a seminal figure in the transmission of the Buddha-Dhamma to the West. He is currently the abbot of Amaravati Buddhist Monastery in the United Kingdom.

Ajahn Sumedho (Robert Jackman) was born in Seattle, Washington in 1934. Beginning at the age of eighteen, he served overseas as a medic in the United States navy for four years, including the period of the Korean War. Following his military service, he completed a Bachelor of Arts degree in Far Eastern Studies and, in 1963, graduated with a Masters Degree in South Asian Studies at the University of California, Berkeley. He served in the Peace Corps as an English teacher in Borneo from 1964 to 1966, following a one-year stint as a social worker for the Red Cross. In 1966, Ajahn Sumedho was ordained as a novice monk (samanera) at Wat Sri Saket in Nong Khai, northeast Thailand, and received full ordination, as a bhikkhu, in May of the following year.

Following this, he spent the next ten years from 1967-1977 at Wat Nong Pa Pong, studying under the highly venerated teacher, Ajahn Chah. Since that time, he has been regarded as the most influential Western disciple of Ajahn Chah. In 1975 he helped to establish and became the first abbot of the International Monastery, Wat Pa Nanachat in northeast Thailand founded by Ajahn Chah for training his non-Thai students. In 1977, Ajahn Sumedho accompanied Ajahn Chah on a visit to England. After observing a keen interest in Buddhism among Westerners, Ajahn Chah encouraged Ajahn Sumedho to remain in England for the purpose of establishing a branch monastery in the UK. This became Cittaviveka Forest Monastery, in West Sussex.

Ajahn Sumedho was granted authority to ordain others as monks shortly after he established Cittaviveka Forest Monastery. He then established a ten precept ordination lineage for women, "Siladhara".

Ajahn Sumedho is currently the abbot of Amaravati Buddhist Monastery near Hemel Hempstead in England, which was established in 1984. It is part of the network of monasteries and Buddhist centres in the lineage of Ajahn Chah, which now extends across the world, from Thailand, New Zealand and Australia, to Europe, Canada and the United States. Ajahn Sumedho has played an instrumental role in building this international monastic community.

Ajahn Sumedho is a prominent figure in the Thai Forest Tradition. His teachings are very direct, practical, simple, and down to earth. In his talks and sermons he stresses the quality of immediate intuitive awareness and the integration of this kind of awareness into daily life. Like most teachers in the Forest Tradition, Ajahn Sumedho tends to avoid intellectual abstractions of the Buddhist teachings and focuses almost exclusively on their practical applications, that is, developing wisdom and compassion in daily life. His most consistent advice can be paraphrased as to see things the way that they actually are rather than the way that we want or don't want them to be ("Right now, it's like this..."). He is known for his engaging and witty communication style, in which he challenges his listeners to practice and see for themselves. Students have noted that he engages his hearers with an infectious sense of humor, suffused with much loving kindness, often weaving amusing anecdotes from his experiences as a monk into his talks on meditation practice and how to experience life ("Everything belongs").

A meditation technique taught and used by Ajahn Sumedho is the "Sound of Silence" (also known in the Hatha Yoga Pradipika, as the Nada tone). Listening to, and resting in, this inner sound produces a peaceful, non-reactive mind in which intuitive wisdom can and does arise. The "Sound of Silence" is also the title of one of Ajahn Sumedho's books (published by Wisdom in 2007).

Ajahn Sumedho is a Theravada bhikkhu whose views mostly match the Modern Theravada viewpoint, similar to other monks in the Thai forest tradition and other Buddhist scholars. He is quoted in the Mauríce Walsh translation of Dígha Nikaya here:

“The Suttas need to be studied, reflected on, and practiced in order to realize their true meaning. They are not meant to be ‘sacred scriptures’ which tell us what to believe. One should read them, listen to them, think about them, contemplate them, and investigate the present reality, the present experience with them. Then, and only then, can one insightfully know the Truth beyond words.”