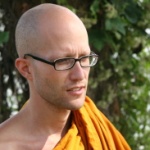 In 1985 he was taken out of kindergarten by his parents to be schooled at home. In 1993 he returned to the public education system at Manitoulin Secondary School. In 1996 he left the public education system again for West Bay Alternative School. In 1997 he moved to Toronto to continue alternative education at Subway Academy II, a three room school above Futures Bakery on Bloor St. In 1998 entered post secondary education at McMaster University in the Arts and Science Programme. In 1999 he withdrew from the Arts and Science Programme at McMaster.

In 2000 he traveled to Thailand for the first time. He undertook practice of Satipatthana Vipassana at Wat Phradhatu Sri Chom Tong. He returned to McMaster University to study Indian Religions and Sanskrit. In 2001 he returned to Thailand to ordain as a monk. He ordained as a monk at Wat Phradhatu Sri Chom Tong, December 4, 2000.

In 2009 he travelled a third time to Wat Thai of Los Angeles to teach a three month meditation course, this time with the added intention to move to America to continue his meditation and studies in a suitable location.