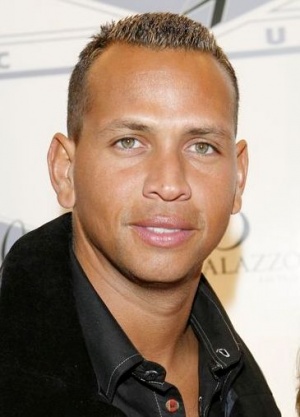 Alexander Emmanuel Rodriguez (born July 27, 1975) is an American professional baseball player of Dominican parentage. Nicknamed "Alex" or "A-Rod," he currently plays third base for the New York Yankees of Major League Baseball. He previously played shortstop for the Seattle Mariners and the Texas Rangers.

Rodriguez is considered one of the best all–around baseball players of all time. He is the youngest player ever to hit 500 home runs, breaking the record Jimmie Foxx set in 1939.

In December 2007, Rodriguez and the Yankees agreed to a 10-year, $275 million contract. This contract was the richest contract in baseball history (breaking his previous record of $252 million).

In February 2009, after previously always denying use of performance-enhancing drugs, including during a now infamous 2007 interview with Katie Couric on 60 Minutes, Rodriguez finally admitted to using steroids, saying he used them from 2001 to 2003 due to what he called "an enormous amount of pressure" to perform.

He married Cynthia Scurtis, a psychology graduate, on November 2, 2002. The couple's first child, Natasha Alexander, was born on November 18, 2004. On April 21, 2008, Cynthia gave birth to their second child, Ella Alexander, in Miami, Florida. They were divorced in September 2008.

Since May of 2009 he has been dating Kate Hudson, an actress and Buddhist and daughter of Goldie Hawn. There are reports that he is planning on officially becoming a Buddhist too.