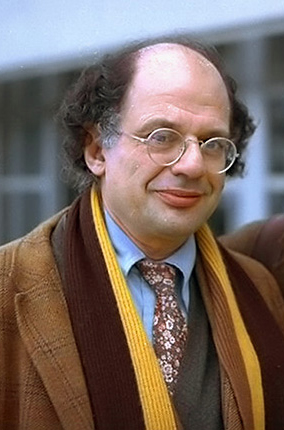 Irwin Allen Ginsberg (pronounced /ˈɡɪnzbərɡ/; June 3, 1926 – April 5, 1997) was an American poet. Ginsberg is best known for the poem "Howl" (1956), celebrating his friends who were members of the Beat Generation and attacking what he saw as the destructive forces of materialism and conformity in the United States.

Ginsberg was born into a Jewish family in Newark, New Jersey, and grew up in nearby Paterson. His father Louis Ginsberg was a poet and a high school teacher. Ginsberg's mother, Naomi Livergant Ginsberg (who was affected by a rare psychological illness which was never properly diagnosed) was an active member of the Communist Party and often took Ginsberg and his brother Eugene to party meetings. Ginsberg later said that his mother "made up bedtime stories that all went something like: 'The good king rode forth from his castle, saw the suffering workers and healed them.'"

As a young teenager, Ginsberg began to write letters to The New York Times about political issues such as World War II and workers' rights. When he was in junior high school, he accompanied his mother by bus to her therapist. The trip disturbed Ginsberg — he mentioned it and other moments from his childhood in his long autobiographical poem "Kaddish for Naomi Ginsberg (1894-1956)." While in high school, Ginsberg began reading Walt Whitman; he said he was inspired by his teacher's passion in reading.

In 1943, Ginsberg graduated from Eastside High School and briefly attended Montclair State College before entering Columbia University on a scholarship from the Young Men's Hebrew Association of Paterson. In 1945, he joined the Merchant Marine to earn money to continue his education at Columbia. While at Columbia, Ginsberg contributed to the Columbia Review literary journal, the Jester humor magazine, won the Woodberry Poetry Prize and served as president of the Philolexian Society, the campus literary and debate group.

Ginsberg worked for a while as a clerk in the Gotham Book Mart, a renowned bookstore and literary hotspot, where he undoubtedly came in contact with many renowned authors and poets.

Ginsberg's spiritual journey began early on with his spontaneous visions, and continued with an early trip to India and a chance encounter on a New York City street with Chögyam Trungpa Rinpoche (they both tried to catch the same cab), a Tibetan Buddhist meditation master of the Vajrayana school, who became his friend and life-long teacher. Ginsberg helped Trungpa (and New York poet Anne Waldman) in founding the Jack Kerouac School of Disembodied Poetics at Naropa Institute in Boulder, Colorado.

Ginsberg was also involved with Krishnaism. He befriended A.C. Bhaktivedanta Swami Prabhupada, the founder of the Hare Krishna movement in the Western world, a relationship that is documented by Satsvarupa dasa Goswami in his biographical account Srila Prabhupada Lilamrta. Ginsberg donated money, materials, and his reputation to help the Swami establish the first temple, and toured with him to promote his cause.

Music and chanting were both important parts of Ginsberg's live delivery during poetry readings. He often accompanied himself on a harmonium, and was often accompanied by a guitarist. When Ginsberg asked if he could sing a song in praise of Lord Krishna on William F. Buckley, Jr.'s TV show Firing Line on September 3, 1968, Buckley acceded and the poet chanted slowly as he played dolefully on a harmonium. According to Richard Brookhiser, an associate of Buckley's, the host commented that it was "the most unharried Krishna I've ever heard."

Attendance to his poetry readings was generally standing room only for most of his career, no matter where in the world he appeared. Ginsberg came in touch with the Hungryalist poets of Bengal, especially Malay Roy Choudhury, who introduced Ginsberg to the three fishes with one head of Indian emperor Jalaluddin Mohammad Akbar. The three fishes symbolised coexistence of all thought, philosophy and religion.