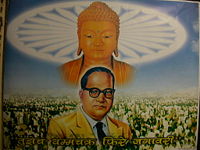 Bhimrao Ramji Ambedkar, Ph.D., J.D., D.Sc. (1891-1956) was born in India into the untouchable caste in 1891. After managing to get a basic education he won scholarships to study in England and the USA and became a brilliant lawyer. In the following years he became a vigorous and outspoken social reformer, in particular criticizing the Hindu caste system. After Indian independence Ambedkar chaired the committee that wrote the country’s new constitution.