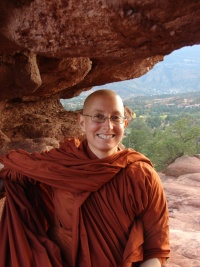 Ajahn or Amma Thanasanti Bhikkhuni was born into a loving family of Jewish ancestry in Burbank, California. She was first introduced to Buddhist teaching and insight meditation in 1979 in a class taught by Jack Engler at University of California Santa Cruz. From that time she consciously committed to awakening and envisioned living her life as a nun. From the onset, Ajahn Chah, Dipa Ma and His Holiness the Dalai Lama were primary inspirations to her. Her teachers also included Christopher Titmuss, Sharon Salzberg, Joseph Goldstein, Jack Kornfeild, Peace Pilgrim and the work and teachings of Gandhi.

After completing a BA in Biology from UC Santa Cruz, she worked for a few years as an analytical chemist. In 1987 she went on a pilgrimage to India, Nepal and Thailand to meet and practice with Dipa Ma, his Holiness Dalia Lama, Ajahn Chah and Ajahn Buddhadasa; meditation masters she had heard about in 1979.

In 1989, she formally joined the Ajahn Chah lineage and the community of nuns at Amaravati Buddhist Monastery to begin training as a novice. That began the process of intensive training, study and meditation practice. After 2 years as an Anagarika, she received ordination in 1991 with Ajahn Sumedho as her preceptor. She lived at both Amaravati and Chithurst Buddhist Monasteries in England.

For several years Amma Thanasanti was involved in the leadership team and guidance of the nuns' community at Chithurst and Amaravati. Since 1996 her community and monastic responsibilities were interspersed with teaching intensive meditation retreats in the US, UK, Switzerland and Australia.

In 2000 she took Bodhisattva vows with His Holiness Dalai Lama en-route to spend extensive time in retreat in the remote bush of Australia. From that point on, her practice shifted and the place of compassion and relationship with nature became central.

In order to pursue her vision of how monastic and lay practitioners can work together in the modern world to create viable communities for practice in the United States, she took the significant step of leaving the formal affiliations of Amaravati and associated monastic communities and returned to the USA. In 2009 she founded Awakening Truth a non-profit 501 (c)3 organization whose mission is to create a Bhikkhuni training monastery and facilitate ways monastics and lay practitioners can work together to support whole life practice.

In August 2010, after being a nun for 19 years, she was ordained as a Bhikkhuni at Aranya Bodhi Forest Hermitage, in the historic first dual Theravada Bhikkhuni ordination to be conducted in North America. Ayya Tathaaloka is her preceptor.

Currently she is based at the Shakti Vihara hermitage in Colorado Springs, Colorado as a solitary alms mendicant nun where her time is interspersed between writing, teaching and time meditating in the nearby Garden of the Gods.