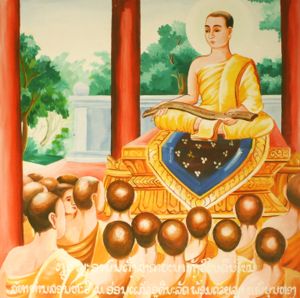 Ananda reciting the Suttas at the First Buddhist Council

Ananda was the son of the Buddha’s uncle Amitodana, he was for many years the Buddha’s personal attendant and was also the most widely loved of all his disciples. If Sariputta personified wisdom and Moggallana personified psychic ability, then Ananda certainly personified kindness, gentleness, warmth and love. The Buddha praised him for his ‘acts of love through body, through speech and through mind’ (Digha Nikaya 2. 144), meaning that he was always ready to lend a helping hand, that he always spoke kindly to people and that he always thought well of others. The Buddha even said that he shared some of the very qualities that he himself had - that people were delighted to see him, that they delighted when he taught the Dhamma and they were disappointed when he finished speaking (Digha Nikaya 2. 145).

Ananda had a crucial role in the First Buddhist council. Having spent so many years close to the Buddha and remembering many of his discourses, he recited them during the council so that the other participants could commit them to memory and pass them down. It is with Ananda's words, Evaṃ me sutaṃ..., ‘Thus have I heard…’ that most suttas begin with.

Great Disciples of the Buddha, Nyanaponika Thera and Hellmuth Hecker, 1997.