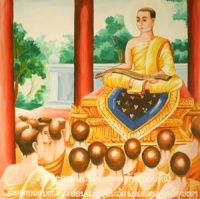 Ananda was the son of the Buddha’s uncle Amitodana, he was for many years the Buddha’s personal attendant and was also the most widely loved of all his disciples. If Sariputta personified wisdom and Moggallana personified psychic ability, then Ananda certainly personified kindness, gentleness, warmth and love. The Buddha praised him for his ‘acts of love through body, through speech and through mind’ (Digha Nikaya 2. 144).

Ananda urging the Buddha to ordain women as nuns

"Is a woman able to gain the fruit of stream-entry, once-returning, non-returning, and arahantship, if she leaves the household life and enters into homelessness and follows the teaching and discipline of the Exalted One?"

The Buddha affirmed this. Thereupon Ananda rephrased his request:

If a woman is able to do this, Master; and moreover Maha-Pajapati Gotami has rendered great service to the Master: she is his aunt, his governess and nurse, nourished the Exalted One with her own milk after his mother died; therefore it would be well if the Blessed One would allow women to leave home for the homeless life, to follow the teaching and discipline of the Master.

Ananda showing that "desire" for enlightenment is okay

If somebody should want to see his reflection or image, he could do so only through a cause, namely a mirror or a clear body of water. In the same way do the five aggregates reflect the image of "I am." As long as one depends on them and is supported by them, so long will an "I" be reflected. Only when one does not rely on them any longer, will the image of "I" disappear.