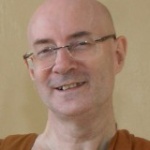 Bhikkhu Anandajoti was born near Birmingham in England and spent the better part of his first 35 years there, but is now a resident in the East since 1987, mainly in Sri Lanka, India, and Malaysia. He ordained in the Theravāda tradition in 1995 and received higher ordination the following year. He is currently a resident in Vivekavana Solitude Grove, a remote meditation centre near the top of a mountain in Penang State, Malaysia.

Godwin Samararatne was his first Dhamma teacher and his first Buddhist meditation teacher, so he has proved to be one of the most influential people in his life.