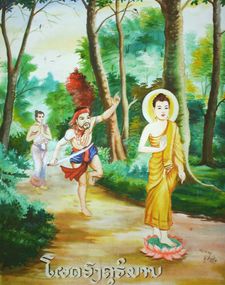 Angulimala (Pāli: "garland of fingers") is an important early figure in Buddhism, particularly within the Theravada school. Depicted in the suttas as a ruthless killer who is redeemed by conversion to Buddhism, his story is seen as an example of the redemptive power of the Buddha's teaching and the universal human potential for spiritual progress.

Two texts in the Pali canon concern themselves with Angulimala's initial encounter with the Buddha and his conversion. The first is the Theragatha, verses 866-91, and the second is the Angulimala Sutta in the Majjhima Nikaya. Both offer a fairly short description of Angulimala's encounter with the Buddha, and omit much of the background information later incorporated into the story (such as Angulimala being placed under an oath by a jealous teacher). These later additions- which appear in the sutta commentaries attributed to Buddhaghosa and Dhammapala (the Majjhima Nikaya commentary known as the Papancasudani (Ps) and the Therigatha commentary Paramattha-dipani (Pad), respectively)- may represent attempts by later commentators to "rehabilitate" the character of Angulimala- making him appear as a fundamentally good human being entrapped by circumstance, rather than as a vicious killer. The sutta texts themselves do not provide for any motive for Angulimala's actions, other than pure sadism.

A robber who was converted by the Buddha in the twentieth year of his ministry, and who, later, became an arahant. His story appears both in the Majjhima Cy., 743ff., and in the Thag. Cy., ii.57ff. The two accounts differ in certain details; A summary of the two versions is as follows. He was the son of the Brahmin Bhaggava, chaplain to the king of Kosala, his mother being Mantānī. He was born under the thieves' constellation, and on the night of his birth all the armour in the town shone, including that belonging to the king. Because this omen did no harm to anyone the baby was named Ahimsaka. The Thag. Cy. says he was first called Himsaka and then Ahimsaka. See also Ps. of the Brethren, 323, n.3. At Takkasilā (Taxila) he became a favourite at the teacher's house, but his jealous fellow-students poisoned his teacher's mind, and the latter, bent on his destruction, asked as his Guru-Dakshina (honorarium) a thousand human right-hand fingers. Thereupon Ahimsaka waylaid travellers in the Jālinī forest in Kosala and killed them, taking a finger from each. The finger-bones thus obtained he made into a garland to hang round his neck, hence the name Angulimāla (Anguli - Finger, Mala - Garland).

Villagers petitioned the king of Kosala, who vowed to hunt down Angulimala. Fearing for her son's life, Angulimala's mother set out to find him and warn him of the king's intent. The Buddha perceived with his "divine eye" (faculty of clairvoyance) that Angulimala had slain 999 victims, and was desperately seeking a thousandth. If the Buddha encountered Angulimala that day, he would become a monk and subsequently attain Nirvana. If Angulimala encountered his mother instead, he would slay her as his thousandth victim and fall into hell for millennia as a matricide.

The Buddha set off to intercept Angulimala, despite being warned by the people of the village in which he was staying. On the road through the forest of Kosala, Angulimala first saw his mother who came to warn him of the impending arrival of the kings' army. Angulimala, after some deliberation, decided to make her his 1000th victim. But then when Buddha also arrived, he chose to kill him instead. He drew his sword, and started running towards the Buddha. But although Angulimala was running as fast as he could, he couldn't catch up with the Buddha who was walking calmly. "The Blessed One willed a feat of psychic power such that Angulimala, though running with all his might, could not catch up with the Blessed One walking at normal pace" (MN 86, translation from Thanissaro Bhikku). This bewildered Angulimala so much that he called to the Buddha to stop. The Buddha said that he himself had already stopped, and that it was Angulimala who should stop. Angulimala asked for further explanation, after which the Buddha said that he had stopped harming living beings, and that Angulimala was still harming and hurting living beings. After hearing this, Angulimala changed his ways, vowed to cease his life as a brigand and joined the Buddhist order.

Angulimala is the earliest documented serial killer in human history.

Later, King Pasenadi (the king of Kosala) set out to find and kill Angulimala. He stopped first to pay a visit to the Buddha and his followers at the monastery where they dwelled. He explained to the Buddha his purpose, and the Buddha asked how the king would respond if he were to discover that Angulimala had given up the life of a highwayman and become a monk. The king said that he would salute him and offer to provide for him in his monastic vocation. The Buddha then revealed that Angulimala sat only a few feet away, his hair and beard shaven off, a member of the Buddhist order. The king, astounded, offered to donate robe materials to Angulimala, and then returned to his palace.

Later, Angulimala came across a young woman undergoing a difficult labor. He went to the Buddha and asked him what he could do to ease her pain. The Buddha told Angulimala to go to the woman and say:

Angulimala pointed out that it would be untrue for him to say this. The Buddha offered this revised stanza:

'Sister, since I was born with the noble birth (became a monk), I do not recall intentionally killing a living being. Through this truth may there be wellbeing for you, wellbeing for your fetus.' The Buddha was making a word-play here on the word "born" to support Angulimala, who was suffering from severe remorse which was badly obstructing his meditation, of his renewed commitment to harmlessness since becoming a monk.

After Angulimala delivered this benediction, the woman safely gave birth to her child. This verse, commonly called the Angulimala paritta, continues to be recited at the blessings of houses or pregnant women in Theravada countries.

This helped Angulimala focus his mind on his basic meditation subject. Before, there would always appear in his mind's eye, the place in the jungle where he had slain so many people. After performing the Act of Truth, he was seen to bring safety to people and people started to approach him and provide him with almsfood.

At last, his earlier name Ahimsaka fully befitted him. Most of the people had gained full confidence in his inner transformation and there was no lack of support for him.

However a resentful few could not forget that he was responsible for the deaths of their loved ones. Unable to win revenge through the law, they took matters into their own hands. With sticks and stones, they attacked him as he walked for alms.

With a bleeding head, torn outer robe and a broken alms bowl, Angulimala managed to return to the monastery. The Buddha encouraged Angulimala to bear his torment with equanimity; he indicated that Angulimala was experiencing the fruits of the karma that would otherwise have condemned him to hell. This illustrates the Buddhist belief that while the effects of karma are inescapable, the form that they take and the schedule on which they occur can be modified by later actions -- in this case, Angulimala experienced physical suffering during the course of his last life, rather than experiencing torment in another birth for a much longer period of time.

Being an arahant, Angulimala remained firm and invulnerable in mind and heart. But his body, the symbol and fruit of previous kamma was still exposed to the effects of his former evil deeds. As an arahant, he needed no words of consolation, but a reminder of the kammic concatenation of cause and effect, which still has to be endured until the end.

When he entered Sāvatthi for alms, he was attacked by the mob, but on the admonition of the Buddha, endured their wrath as penance for his former misdeeds.

According to the Dhammapadatthakatha (iii.169) he appears to have died soon after he joined the Order.