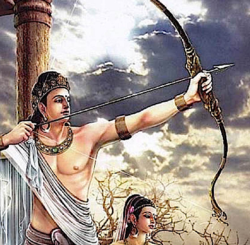 The Buddha to be was very proficient at archery 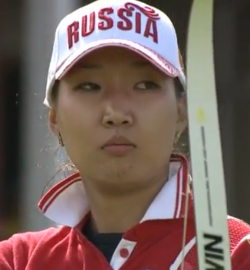 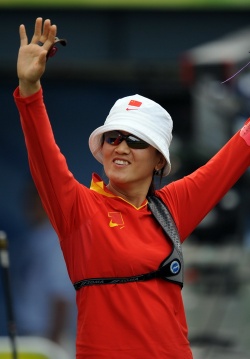 Many Buddhist nations do well at archery in the Olympics. Here Zhang Juanjuan of China wins the gold medal in 2008.

Archery dates back to 10,000 BCE. where arrows have been found in present day Germany. Archery has been used for combat and hunting, but today is primarily used for recreational target shooting and as a meditation as shown below in the discussion on kyudo.

The Buddha was a member of the warrior caste in the Sakyan tribe. As such, he certainly would have been taught the skills of archery. It is reported that the Buddha-to-be (prior to the going forth and enlightenment) was actually very good at archery and won contests. Thus, the two sports or exercises that the Buddha participated in were archery and later as a teacher; walking and stairclimbing (he regularly climbed Vulture Peak to meditate and teach). But it is only archery (that we know of) that he participated at a competitive level and was successful. 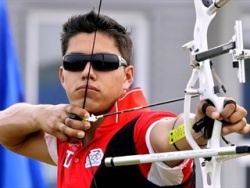 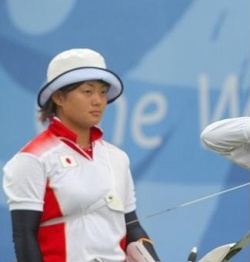 The South Korean team has won the gold in the women's team event at the Olympics ever since the event inception in 1988, 9 straight gold medals 1988-2021

As shown in the pictures here, Buddhist nations (countries with about 50% Buddhist population or more) tend to do very well at archery in the Olympics and World Championships. Some Buddhist nations, such as Bhutan regularly send athletes to the Olympics, but only for the sport of archery and not for any other competition. Currently, South Korea leads all other nations in Olympic gold and overall number of medals.

Kyūdō (弓道:きゅうどう, Kyūdō?), literally meaning "way of the bow", is the Japanese art of archery. It is a modern Japanese martial art (gendai budō). Archery and kyudo requires much concentration and thus, it can be an excellent practice and aid to meditation. Both meditation and archery can compliment each other and when done in a ceremonial way, as in kyudo, the archery itself can be a meditation. Often known as "Zen Archery" it is not limited to the school of Zen Buddhism and in fact using sport or another activity in this way may actually have its origin in the Theravada Pali Canon; see Sedaka Sutta.

It is estimated that there are approximately half a million practitioners of kyūdō today.

The beginning of archery in Japan is, as elsewhere, pre-historical. The first molded metal images with distinct Japanese asymmetrical longbow are from the Yayoi-period (ca. 330 BCE – 250 BCE). The first written document is the Chinese chronicle Weishu (dated before 297 CE), which tells how at the Japanese isles people use "a wooden bow that is short from the bottom and long from the top." During these times the bow began to be used in addition to hunting also in warfare. Later the ceremonial use of a bow was adopted from China and continued in Japan after it ended in China. From China was also adopted the composite technique of bow manufacturing gluing together b splinters.

The changing of society and the military class; the samurai, taking power in the end of the first millennium created a requirement for education in archery. This lead to the birth of several archery schools, such as the mounted archery school Ogasawara-ryū. The need grew dramatically during the so called Genpei war (1180–1185). From the 15th to the 17th century Japan was ravaged by civil war. In the latter part of the 15th century Heki Danjo Masatsugu revolutionized archery and his footman's archery spread rapidly. Many new schools were formed, some of which such as Heki-ryū Chikurin-ha, Heki-ryū Sekka-ha and Heki-ryū Insai-ha remain even today.

In kyūdō, like all archery, the purpose is to hit the target. Kyūdō however is practiced in many different schools, some of which decend from military shooting and others that descend from ceremonial shooting. Therefore, the emphasis is different. Some put emphasis on esthetics and others to efficiency. It is so, that to hit is to be done with a correct technique. Or in inverse to shoot correctly will result inevitably in hit. For this a phrase seisha hitchu, "true shooting, certain hitting", is used.

Kyūdō practice as all budō includes the idea of moral and spiritual development. Today many archers practice kyūdō as a sport, with marksmanship being paramount. However, the goal most devotees of kyūdō seek is seisha seichu, "correct shooting is correct hitting". In kyūdō the unique action of expansion (nobiai) that results in a natural release, is strived for. When the technique of the shooting is correct the result will be for the arrow to arrive in the target. To give oneself completely to the shooting is the spiritual goal, achieved by perfection of both the spirit and shooting technique leading to munen muso, "no thoughts, no illusions". Japanese bow can be used in Zen-practice or kyūdō practiced by a Zen-master. In this respect, many kyūdō practitioners believe that competition, examination, and any opportunity that places the archer in this uncompromising situation is important, while other practitioners will avoid competitions or examinations of any kind.

Since after the Second World War kyūdō has often being associated with Zen-Buddhism. This is largely due to the book Zen in the Art of Archery (1948) by the German author Eugen Herrigel.