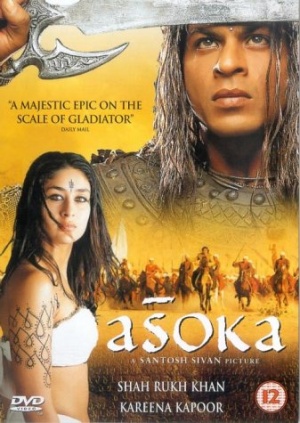 Asoka (Devanagari: अशोक) is a 2001 epic Bollywood film, a historical drama. It is a largely fictional version of the life of the Indian emperor Ashoka the Great, of the Maurya dynasty, who ruled much of South Asia from 273 BCE to 232 BCE. The film was directed by Santosh Sivan and stars Shahrukh Khan as Ashoka and Kareena Kapoor as Kaurwaki, a princess of Kalinga. Ajith Kumar made a special appearance as Susima, brother of Asoka.

The screenplay was written by Santosh Sivan and Saket Chaudhary and the dialogue by Abbas Tyrewala. It was originally released as Ashoka The Great in India. The Tamil release title is Samrat Ashoka. The film was produced by Shahrukh Khan's production company Dreamz Unlimited.

The film opens with a narration of historical context. Emperor Chandragupta Maurya is giving away all his material possessions and taking Sanyas. His grandson, prince Asoka, claims his grandfather's sword. The Emperor explains that the sword is in fact a demon that, whenever unsheathed, craves blood without regard to friend or foe. He throws away the sword but the young prince reclaims and unsheathes it whereupon it (accidentally) slashes a couple of birds on a tree.

The film takes us a few more years ahead. Prince Asoka (Shahrukh Khan), now a brave youth, is battling the thief of Takshila. His generals inform him that his reinforcements have not arrived. Asoka figures out that his half-brother Susima (Ajith Kumar) has deliberately withheld them. In spite of the odds, Asoka uses shrewd guerilla tactics to defeat the enemy. One observes that Asoka identifies readily with harsh battle conditions and derives pleasure from victory (and death to his enemies).

Prince Asoka returns to Magadha. But his father, King Bindusara, cannot show his pleasure. Susima's mother, the shrewd queen, has woven her webs around the King. She plays a political manoeuvere where the other Queen Dharma is made fearful for her son Asoka. The gentle and somewhat gullible Queen Dharma, content with her son being alive in favor of ascending the throne, compels the prince to renounce his right and leave the kingdom to lead the life of a common man. The brave prince is naturally disappointed, but he accedes to his mother's wishes and leaves.

Asoka meets a lovely maiden Kaurwaki (Kareena Kapoor) and falls in deep love with her. Soldiers from the neighboring kingdom of Kalinga are chasing her and her little brother Arya. They are on the run along with their faithful general Bheema (Rahul Dev). During one of the many ambushes by Kalinga soldiers, Asoka launches into the fray and skillfully defends Kaurwaki. Asoka reveals his name as Pawan (in accordance with his mother's wish). Unbeknownst to him, though, Kaurwaki and Arya are the princess and prince of Kalinga, fleeing from their home when the wicked Prime Minister assassinated their parents.

The Prime Minister is hell bent on ascending the throne. He launches various raids to find and slay the prince. In one such raid, a commoner sacrifices his children to save the prince, putting fake royal necklaces around them. The Prime Minister is given the fake royal seal and now prepares to ascend the throne. Princess Kaurwaki, Prince Arya and Bheema live in hiding and bide their time.

Asoka receives word that his mother is unwell. He parts from Kaurwaki, promising to return, and hastens to Magadha, only to find that his mother is quite well, and has discovered the conspiracy to remove him from power. The King, though, is still under the charms of Susima's wicked mother. He gruffly dispatches Asoka to quell a rebellion in Ujjain. Asoka obeys, but first returns to find Kaurwaki. Not able to find her, and not knowing she has gone into hiding, he is informed that they were slaughtered and shown the remains of the commoner's children instead.

Mad with grief and anger, he embarks on a violent campaign of Ujjain. He fights with cold-blooded rage, without desire for his own life or the will to win, only to kill his enemy. (He says to his generals before the battle, he seeks only death.) News of his exploits travels to Magadha. Susima, now seething with envious rage, plants his spies in Asoka's army. The spy soldiers wound Asoka in battle and he is taken from the field, even as Ujjain is reconquered and annexed to the Magadha kingdom.

Asoka is taken to a Buddhist monastery to recover. He meets a Buddhist maiden, Devi (Hrishita Bhatt), who cares for him. Even here, Susima's spies attempt to assassinate Asoka several times. In one of the attempts, Devi accidentally kills the assassin, and in Buddhist tradition, no one will now accept Devi as a wife. Asoka marries Devi in return and returns in splendor to Magadha.

Susima and his brothers are wild with anger and envy and frustrated with their futile attempts to eliminate Asoka. They make their last political move, bribing the court astrologer to murder Devi (pregnant with Asoka's children). The plot fails and Queen Dharma is killed instead. Asoka, now angered beyond measure, kills Susima and all his half-brothers (except Sugrata, who escapes and seeks asylum in Kalinga). Asoka is now anointed Emperor, but carries the title of Chanda Asoka, Evil Asoka. Devi, the gentle Buddhist maiden bent on swaying Asoka to peaceful ways, is shocked at this unbridled brutality. She informs him that she is leaving him. Asoka seems affected somewhat, but it does not prevent him from declaring war on Kalinga.

Princess Kaurwaki and Prince Arya reveal themselves in Kalinga along with Bheema, and brandish the royal seal. The Prime Minister is executed for treason. Princess Kaurwaki ascends the throne. She defies Asoka, citing his brutality to his own brothers, and prepares Kalinga for war. She secretly pines for her Pawan, but does not know it is indeed Asoka.

Asoka assembles a mighty army and marches to the battlefield. Consumed with rage (toward Sugrata, but directed now at Kalinga), he nearly kills his old friend Virat (Danny Denzongpa). A terrible war is fought in Kalinga. The Magadha army suffers defeat initially, as Kaurwaki and a battalion of Kalinga women fight side by side with Kalinga soldiers. But the Magadha forces are rallied by a violent and merciless Asoka. The resulting battle turns the tide of the war and the Magadha army inflicts a cruel defeat on Kalinga. Not content with mere victory, Asoka's warriors raze everything and butcher everyone in sight. Sugrata is slain, as is Bheema. Kaurwaki is wounded.

In his chambers that evening, Asoka is informed by his brother Vitasoka (Madhu Varshitt), who has taken up Buddhism, that Devi has delivered twins, Mahindra and Sanghamitra. Asoka visits the scene of the Kalinga battlefield, where he suddenly discovers his horse, Pawan, who was supposed to be in Kaurwaki's possession. With a sudden surge of hope, he frantically searches for Kaurwaki. Asoka managed to find her in the battlefield. there, he had a heart-to-heart talk with Kaurwaki. He apologized deeply for his action and Kaurwaki, in return, forgave him. they were, however interrupted by prince Arya, the Prince of Kalinga. He had joined the war because he wanted to fight for his kingdom and, unfortunately for him, had been wounded severely by several arrows hitting him on his back, causing him his death. Because of Arya dying in his arms, he suddenly finds his victory empty. In his attempt to fulfill his goals, he only managed to be surrounded with more death. His enemies, his family, and even Arya, all dead, because of him. His grandfather's advice (about the sword) was right.

The film ends with Asoka throwing the sword at the same spot his grandfather had thrown it and embraced Buddhism. The final narrative describes how Asoka not only built a large empire, but spread Buddhism and the winds of peace through it.