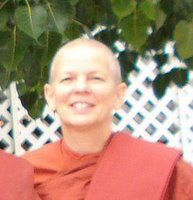 Ven. Sarani is a dual citizen of both the United States and Canada and has been practicing in meditation retreats for more than 20 years. She “went forth” as a samaneri (female novice) with Bhante Sirinovaso of British Colombia in the year 2005 and came to Dhammadinna first for meditation retreat in spring of 2007. Samaneri Sarani has been an important part of the women’s Buddhist monastic community at Dhamma Dena coming into being since before its inception.