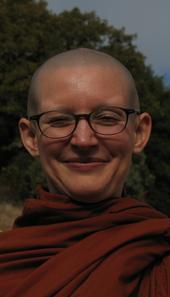 Ayya Tathaaloka Bhikkhuni is an American born Theravadan bhikkhuni and Buddhist teacher. Born "Heather Buske" in Washington, D.C., in 1968, she began monastic life at age 19, taking anagarika ordination at age 20.[1] Ayya Tathaaloka received the full bhikkhuni ordination in 1997, at a gathering of Bhikkhu and Bhikkhuni Sanghas in Southern California. As of the 2006 Vassa, her "10th rain" (a traditional term for the annual three-month retreat) after taking higher ordination, she is eligible to be called Ajahn, the Thai veneration for senior monastics who teach. But, she still prefers "Ayya." She has studied in Korea, Thailand and other countries, and has has taught around the world, including at Bhikkhuni Sangha University in South Korea.

Ayya Tathaaloka's mentor, Ajahn Maha Prasert of the Thai Forest Tradition, and many others encouraged her to open the first Theravadan women monastics' retreat in Northern California. In 2005, with community support, she opened Dhammadharini Vihara (a vihara is a monastic residence) in the Niles District of Fremont, California, United States, and began serving as Abbess. She was awarded a 2006 Outstanding Women in Buddhism, at the United Nations in Bangkok. She also presented a paper at the International Congress on Buddhist Women's Role in the Sangha, in Hamberg, Germany, August 2007.