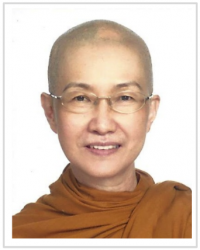 Ayya Upekkha came to learn about the Dhamma, via Theravada and Mahayana traditions of Buddhism, from 1986. She did a three year course in Mahayana Buddhism, a Diploma course in Theravada Buddhism and numerous retreats under both traditions. She was ordained in Taiwan firstly as a Samaneri in July 2003, then Sikkhamana in Jan 2004 in the Dharmaguptaka (Mahayana) tradition.

Ayya then went to the Yuan Guang Monastic Training College Taiwan for two years and received higher ordination as a Bhikkhuni in December 2005. She practiced and served in this tradition in Singapore and then two years in Perth, Australia until March 2009. As Ayya was personally inclined towards strict vinaya practices and meditation, she applied to Santi Forest Monastery in New South Wales to explore the forest monastic tradition. She took to it like fish to water, and was accepted into the Sangha by Abbot Bhante Sujato, and consequently switched over to the brown robes in 2009. It here that Ayya learnt of the plight of the Theravada Bhikkhunis and female aspirants who wish to be trained and guided in practice. With the invitation from BSV and Bhante Jaganatha, she decided to help in their vision towards building a 4 fold forest monastery and establishing a Theravada Bhikkhuni Sangha in Melbourne.