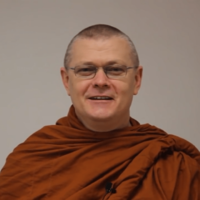 Bhante Sujato (Anthony Best) is an Australian Buddhist Monk. He was a member of the Australian rock band, Martha's Vineyard (est. 1986). One album reached number 77 on the Australian charts. In 1994 he left his music career to take higher ordination in Thailand in the forest lineage of Ajahn Chah. As well as living for several years in forest monasteries and remote hermitages in Thailand, he spent three years in Bodhinyana Monastery (Perth) as secretary of Ajahn Brahmavamso, and over a year in a cave in Malaysia.

He has combined his love of meditation with study of the Buddha's Teachings, and in 2001 published his first book, "A Swift Pair of Messengers", a compilation of Sutta passages on the theme of tranquillity and insight. He has since published many books. He studies and teaches Buddhist texts from comparative and historical perspectives.

He served as founding Abbot of Santi Forest Monastery from 2003-2012.

He is actively involved with Sutta Central (http://suttacentral.net/). He teaches in Australia and internationally.

Bhante Sujato along with his teacher Ajahn Brahm were involved with Re-establishing Bhikkhuni Ordination in the Forest sangha of Ajahn Chah. Sujato along with other scholars such as Brahm and Bhikkhu Analayo had come to the conclusion that there was no valid reason the extinct bhikkhuni order couldn't be re-established. The ordination ceremony led to Brahm's expulsion from the Thai Forest Lineage of Ajahn Chah.