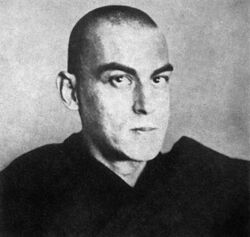 (Charles Henry) Allan Bennett (8 December 1872 – 9 March 1923) was a member of the Hermetic Order of the Golden Dawn. He was a close associate of author and occultist Aleister Crowley.

Allan Bennett was born in London on 8 December 1872. His father, a civil engineer, died when he was still a boy. He was raised as a strict Roman Catholic by his mother; a faith which he had rejected whilst in his teens. There is reference to him having at least one sister. He was educated at Hollesley College and later at Bath, England. Upon leaving school, he trained as an analytical chemist and achieved some success in that field for he was invited to participate in an expedition to Africa by Dr. Bernard Dyer, chemist to the Corn Trade; however, he did not go in the end. His electrical knowledge was profound while still in his early twenties; this and his talent for experimental science, mathematics and physics would stay with him throughout his life.

Bennett was, along with George Cecil Jones, Crowley’s primary teacher during his days in the Hermetic Order of the Golden Dawn. Bennett was educated at Hollesly College, and scraped by as an analytical chemist. Bennett was initiated into the G.D. in 1894, taking the motto "Iehi Aour" ("let there be light"). He was always very poor and tormented by illness, but still made a strong impression on other occultists of the time.

Bennett was one of the most brilliant minds in the order, and favored mysticism and white magic; he was almost wholly concerned with enlightenment rather than siddhis (magical powers). Bennett had high regard for Golden Dawn leader S. L. Mathers, and with him began working on a book of Hermetic Qabalah correspondences that Crowley would later expand upon as Liber 777.

Soon after meeting, Crowley invited Bennett to come stay with him, as Bennett was living in a dilapidated shared apartment. In return, Bennett trained Crowley in the basics of magic and tried to instill a devotion to white magic. Bennett was generally ascetic and sexually chaste, a marked contrast to Crowley’s libertine attitude. Nevertheless, he was an enthusiastic user of mind changing drugs (with which he treated recurrent asthma) and introduced Crowley to this aspect of his occult researches. Crowley once remarked concerning Bennett’s powers: Bennett had constructed a magical wand out of glass, which he carried with him. Crowley himself stated it to look similar in appearance to a chandelier. As it so happened, Crowley and Bennett were walking along one day and came across a group of theosophists who were ridiculing the use of wands. "Allan promptly produced his and blasted one of them. It took fourteen hours to restore the incredulous individual to the use of his mind and his muscles."

At some time between 1889 and 1900, in his late twenties, Bennett traveled to Asia to relieve his asthma, and to dedicate himself to Buddhism. First he traveled to Ceylon where he studied Hatha Yoga under the yogi Shri Parananda. He joined the Sangha and took the name Swami Maitrananda. Later, in Burma, Bennett took the vows of a Buddhist monk, and assumed the name Ananda Metteyya, "Bliss of loving kindness." In 1902 Crowley came to visit him there and was instructed in Hatha Yoga. At this time both men were agreed as to the validity of Buddhist practices. In 1903 he founded the Buddhasasana Samagama or the International Buddhist Society in London, UK (not to be confused with the International Buddhist Society in British Columbia, Canada). Bennett later began a periodical called Buddhism: An Illustrated Review.

Some sources say that Bennett intended to travel to California due to health reasons. But with the outbreak of World War I and the denial of an immigration visa by the US, he found himself stranded, and forced to live in poverty and illness. He died on his native English soil at the age of 51, on 9 March 1923, buried at Morden cemetery. His lifelong friend and Buddhist writer, Dr Cassius Pereira, wrote: "And now the worker has, for this life, laid aside his burdens. One feels more glad than otherwise, for he was tired; his broken body could no longer keep pace with his soaring mind. The work he began, that of introducing Buddhism to the West, he pushed with enthusiastic vigour in pamphlet, journal and lecture, all masterly, all stimulating thought, all in his own inimitably graceful style. And the results are not disappointing to those who know."

Allan Bennett was a pioneer, and without him, Buddhism would not have entered the Western world as it did. He wrote two books: The Wisdom of the Aryas (1923)(based in part on a series of discourses in Clifford Bax's studio in 1919 and 1920) and The Religion of Burma (1911, reprinted in 1929 by Theosophical Publishing House as The Religion of Burma and Other Papers). Some of his addresses and papers are still intact and used today.