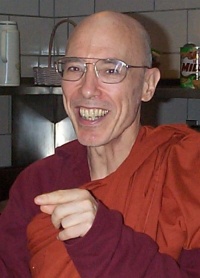 Bhikkhu Bodhi, Ph.D., (1944- ) was born named Jeffrey Block in Brooklyn, New York. He earned a Ph.D. in philosophy from Clairemont Graduate School in 1972. He was the editor and president of the Buddhist Publication Society in Sri Lanka where he lived for most of his early years as a Theravada monk. He has translated most of the Nikayas of the Pali Canon and has improved the quality of previous translations for the modern reader. He has given keynote addresses to the United Nations and to the International Buddhist Women’s Conference. He supports the full ordinations of women as bhikkhunis (nuns).