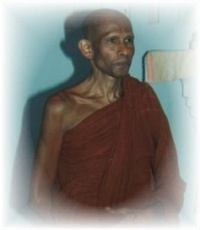 Bhikkhu Ñanananda Katukurunde Nyanananda Thera (spelled Ñāṇananda in Pali, sometimes called Gnanananda in Sinhala) is a Sri Lankan Bhikkhu (Buddhist Monk) and a Buddhist scholar. He is best known for the research monograph Concept and Reality in Early Buddhist Thought and the exploratory study The Magic of the Mind. Ven. Nyanananda is the abbot of Pothgulgala Aranya, a small forest monastery in Devalegama, Sri Lanka. Before his ordination, he was an assistant lecturer in Pali at the University of Peradeniya. After entering the Buddhist order in 1969 he resided mostly in remote hermitages.

Ven. Nyanananda was born in 1940 to a Buddhist family in Galle District in Sri Lanka. He received his school education from Mahinda College, Galle. In 1962 he graduated from the University of Peradeniya specializing in Pali Studies, and served as an Assistant Lecturer in Pali at the same University for a brief period of time. He renounced his post in 1967 to enter the Order of Buddhist monks under the name Katukurunde Nyanananda in the forest monastic tradition of Sri Lanka.

Ven. Nyanananda′s best known works are Concept and Reality in Early Buddhist Thought, published in 1971, and The Magic of the Mind, published in 1974, both completed during his stay at the Island Hermitage. His latest major work is a collection of sermons on Nibbana that was initially published in Sinhala and later in English translation, titled Nibbana - The Mind Stilled.

This penetrative study shed new light on the early Buddhist views on the psychology of perception, the conceptualizing process and its transcending. The discussion focuses upon two important but controversial terms found in the Buddha's discourses: papañca and papañca-saññā-saṅkhā Ven. Nyanananda was the first to analyze the unique grammatical shift found in the sections in which the compound papañca-saññā-saṅkhā appears in the Madhupiṇḍika Sutta (MN 18), which he regards as the “locus classicus as it affords us a clearer insight into the problem of papañca”. His radical interpretation of papañca as ‘conceptual proliferation’ is now widely accepted and used by modern Buddhist scholars. The book was introduced as “an imaginative interpretation of the Buddhist critique of conceptual thought in the Pali tradition” in the Encyclopedia of Religion.

The magic of the mind

This is an exposition of the Kālakārāma Sutta (AN 4.24), a canonical discourse of hallowed tradition that had subsequently fallen into neglect. Ven. Nyanananda gives an annotated translation of the sutta prologued by a humorously conceived parable of a magic show. The main theme of the work is the illusory nature of Viññaṇa. The book attempts to draw out the psychological and philosophical implications of the text, centered on a discussion of Paticcasamuppada as a golden mean which freely transcends the dualities of existence and non-existence and mind-and-matter.

While at Nissarana Vanaya, at the invitation of the Ven. Matara Sri Nanarama Mahathera, Ven. Nyanananda Thera delivered 33 sermons on the subject of Nibbana, during the period 1988.08.12 to 1991.01.31. This often controversial set of talks were then distributed in cassettes among interested monastics and lay Buddhists. In 1997, a publications trust named Dharma Grantha Mudrana Bharaya (D.G.M.B.) was set up with the public trustee of Sri Lanka to freely distribute Ven. Nyanananda's works. The first publications of D.G.M.B. were these sermons in Sinhala, made available in 11 volumes, titled Nivane Niveema. Since 2003 the English translations have been made available in a 7-volume series titled Nibbana – The Mind Stilled.

In these sermons Ven. Nyanananda attempted to “trace the original meaning and significance of the Pali term Nibbana based on the evidence from the discourses of the Pali Canon”. This has led to a detailed analysis and a re-appraisal of some of the most controversial suttas on Nibbana. While this collection develops on his earlier works, the Nibbana sermons are presented with a more pragmatic outlook to benefit those who are keen on realizing this ultimate goal of Buddhist practice.

The Heretic Sage is a series of interviews with Bhikkhu Yogananda. They contain great insight and wisdom of Bhikkhu Nanananda and are frequently quoted on Buddhist discussion forums, including Dhamma Wheel. See: