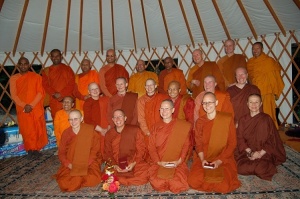 The historic double ordination ceremony in Northern California in August 2010

After Siddhattha became the Buddha, Maha Pajapati Gotami approached him and asked if he would allow her and other women to renounce the world, thus becoming nuns. The Buddha was very reluctant to do this but Ananda interceded on Gotami’s behalf. He asked if women had the same spiritual potential as men and the Buddha replied, “Having gone forth from home into homelessness in the Dhamma and discipline women are able to realise all the states leading to enlightenment and enlightenment itself.’

Then Ananda asked the Buddha to consider how kind and helpful his foster mother had been to him. ‘Lord, Mahà Pajàpatã Gotamã was of great help to you – she is your aunt, your foster mother, she gave you her milk and suckled you when your mother died.’ Moved by these words, the Buddha decided to allow women to become nuns.

Many scholars and teachers have theorized some possibilities for the reluctance:

There is some evidence to suggest the latter may be true. In the Suttas it is reported that previous Buddhas (fully enlightened teachers of the masses) also had a bhikkhuni order.

Bhikkhu Dr. Analayo, a scholar monk has been a strong advocate for bhikkhuni ordination and in his research feels that the Buddha was misrepresented in the texts about being reluctant to ordain women. Ven. Dr. Analayo pointed out an obvious timeline discrepancy that amazingly has gone undetected until now. It involves the deeply held belief that Ananda played an instrumental role in the founding of the bhikkhuni sangha. He was credited, and later chastised by the First Council, for advocating for the ordination of the Buddha's maternal aunt and stepmother, Mahapajapati. In a paper presented at the University of Marburg, Germany, Ven. Dr. Analayo writes, "There are many problems chronologically, however, in the traditional account of Mahaprajapati (from the Commentaries). She first requested ordination five years after Buddha's enlightenment; but Ananda, who requested Buddha on her behalf, first ordained only twenty years after Buddha's enlightenment. Considering that Mahaprajapati, as Buddha's maternal aunt, raised him after his mother's death, she would have been about eighty years old when Ananda was senior enough to make the request."

To be properly ordained, a nun must be ordained first by a quorum of nuns and then a second time by a quorum of monks. In Theravada lands the nun’s lineage died out around the turn of the first millennium and traditionalists do not believe that it can or should be revived because there are no nuns to ordain new nuns. However, the nuns’ lineage continues in most Mahayana countries, and, in places like Taiwan, nuns are a dynamic and respected presence within the Buddhist community.

In 1996 through the efforts of Sakyadhita, an International Buddhist Women Association, the bhikkhuni line was revived. This was done by using the Mahayana nuns for the double ordination ceremony. The Mahayana nuns had a dual ordination both in Theravada and Mahayana, so the line never did completely die out, just the exclusively Theravada line of bhikkhunis. The Mahayana nuns from Taiwan can trace their lineage to the Dharmaguptaka - Vibhajjavada, which is the precursor to Theravada. Therefore, many teachers and scholars have applauded the reinstatement. Today there are more than 1,000 fully ordained bhikkhunis, just as the Buddha allowed for and wished for.