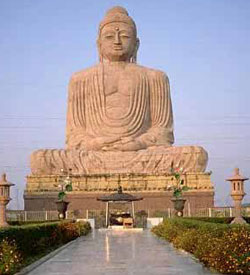 Bodh Gaya is a small town about 12 kilometres from the city of Gaya in the northern Indian state of Bihar where the Buddha attained enlightenment. The name itself is a contraction of Buddha Gaya and only came into use during the 18th century. At the time of the Buddha the place was known as Uruvelà. The town of Bodh Gaya has grown up around the huge Mahabodhi Temple re-built in the 5th century over the very place where the Buddha sat when he became enlightened. Many Buddhist countries and organisations have built temples and monasteries at Bodh Gaya and thousands of pilgrims visit the town every year.