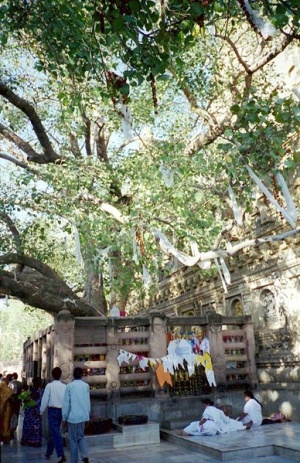 The Bodhi Tree at the Maha Bodhi Temple complex

Bodhi, a Pali word meaning ‘awaken,’ is the name given to the individual tree growing at Bodh Gaya which the Buddha was sitting under when he became enlightened. This Bodhi Tree was a variety of fig known to botanists as Ficus religiosa and which has large spreading branches and rounded leaves with a characteristic pointed tip. In the several accounts of the Buddha’s enlightenment in the Tipitaka, the Bodhi Tree is only mentioned once (Udana 1, repeated at Vinaya 1. 1-7). Tradition says that after his enlightenment the Buddha sat for seven days gazing at the Bodhi Tree out of gratitude for the shelter it had given him (Jataka 1. 77); and modern Buddhists still revere this species of tree for the same reason. The present Bodhi Tree at Bodh Gaya was planted in 1880 and is a distant ancestor of the original one. Bodhi trees are sometimes mistakenly called banyans which is another species of tree altogether.

In the 3rd century BCE King Ashoka of India sent his daughter Theri Sanghamitta to Sri Lanka with a sapling from the right branch of the Sacred Bodhi Tree in Buddhagaya. This was planted in the Mahameghavana garden in Anuradhapura by King Devanampiyatissa of Sri Lanka. This Bodhi Tree is still being venerated as the most sacred spot on the earth by Sri Lankan Buddhists. It remains the oldest historical tree in the world with a written history updated generation after generation (The Bodhivamsa).

The Bodhi Trees of the 28 Buddhas

The Pali Canon records some biographical information of the current Buddha, along with the previous Buddhas in known history. See: 28 Buddhas. Each Buddha attained enlightenment sitting under a tree. All of the trees are considered Bodhi Trees but they were not all the same species of tree.