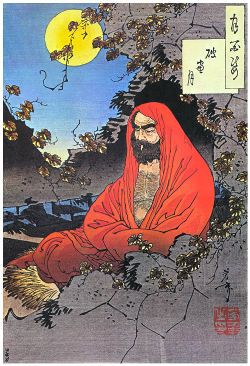 Bodhidharma (c. early 5th century CE) was the Buddhist monk traditionally credited as the transmitter of Ch'an to China. Very little contemporary biographical information on Bodhidharma is extant, and subsequent accounts became layered with legend, but most accounts agree that he was a monk from southern part of India who journeyed to southern China and subsequently relocated northwards. The accounts differ on the date of his arrival, with one early account claiming that he arrived during the Liú Sòng Dynasty (420–479) and later accounts dating his arrival to the Liáng Dynasty (502–557). Bodhidharma was primarily active in the lands of the Northern Wèi Dynasty (386–534). Modern scholarship dates him about the early fifth century.

He is said to have encouraged his monks to do military, martial exercises so that they would not be sluggish and then meditate better. As a result, he is sometimes credited with the founding of the martial arts or at least being the forerunner of the later martial arts.