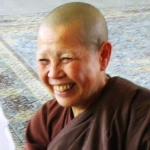 Sister Bodhipala was born in South-East Asia in 1940, married, has three children and five grandchildren. She was ordained as Anagārikā in 1998 and as Sīladhārā in 1999. Venerable Ajahn Sumedho was her Preceptor.

Her daily life in the monastery is a challenging one since she has to simplify the complexity of her thoughts in order to give space to the intuitive knowledge to develop. She was trained in Applied Mathematics and worked as a computer programmer for nearly twenty years. Therefore she is not surprised that this process involves a lot of patience, endurance and is time consuming. She considers the work in the monastery as tools to measure her level of practice and also as the litmus to test her ability in maintaining herself as an observer instead of as a doer.

She realizes that no better place on earth that allows her to be an Observer of the activities of her mind and at the same time she can accumulate her good deeds by serving the Sangha Community at Amaravati.