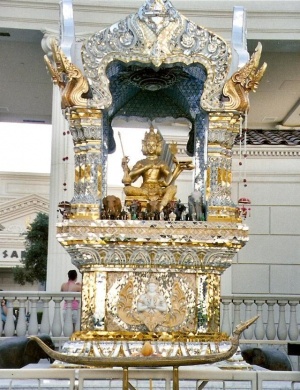 In Hinduism, Brahma is the god (deva) of creation and one of the Trimurti (Hindu Trinity), the others being Vishnu and Shiva. Brahmā's consort is Saraswati, the goddess of learning.

In Buddhism, Brahma is a deva (god) and impermanent. All gods in the Buddhist cosmology are impermanent and still subject to the round of rebirths (samsara) until one reaches nibbana. Brahma has a much lower status in Buddhism and is not that much better than the rest of us and certainly far lower than the Buddha or any of the arahants (enlightened ones). This is illustrated in the following Buddhist passage:

One monk went to the Brahma world (heavenly deva realm) through the powers of his meditation and asked the devas a question for which they could not answer. They referred the monk to what they felt was “the Great Brahma, the Conqueorer, the All-Seeing, the All-Powerful, the Lord, the Maker and Creator.” Then Brahma appeared and repeated these lofty titles given to him by the other gods in describing himself. But he could not answer the question of the monk and avoided the question without answering or admitting that he did not know. After being pressed for some answers, finally Brahma admits that he does not know, by saying, “Monk, these devas believe there is nothing that Brahma does not see, there is nothing he does not know, there is nothing that he is unaware of. That is why I did not speak in front of them. Now, monk, you must go before the Buddha and put this question to him, and whatever answer he gives, accept it.” Digha Nikaya 11. 80, 83

The four-headed Brahma represents the four Brahma Viharas of Buddhism; the four divine emotions to strive for and develop.