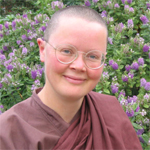 Sister Brahmavara (Susan Pritchard) was born 6 August 1964 in Reading, England. She studied medicine at Sheffield University, trained as a doctor in Auckland, New Zealand and worked as a GP in Shropshire. She started meditating while she was a medical student under the guidance of S. N. Goenka and spent a few years in India at Goenka centres, studying Pali, sitting and serving on retreats. She came to live at Amaravati in October 2000 as a retreat centre manager but soon after arriving requested anagārika ordination. She ordained as a sīladhāra in October 2004.