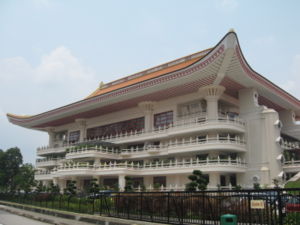 In 1920, Venerable Zhuan Dao realised that the time was right to build a place of practice to propagate the Dharma and to provide lodging for monks, as there were many Buddhist monks who came to Singapore without lodging. In 1921, the building of Phor Kark See Monastery started as the first traditional Chinese forest monastery in Singapore.

Phor Kark See developed from a remote temple into a monastery well known to all. For the pass 20 years, more than 6000 people from all walks of life, from Malaysia and Singapore, had taken refuge in the Triple Gem here. It is also an ideal place of practice for thousands of Buddhists. News about it was soon spread overseas by the Sangha who visited the place.

In 1980, the temple began to build Evergreen Bright Hill Home with the donation of S$5.3 million from Venerable Hong Choon's followers, He Hui Zhong's family's company. In the year 1994, the then President of Singapore, Ong Teng Cheong visited the Home and praised its cleanliness, good service and well-equipped facilities.

On 25 December 1990, Venerable Hong Choon died, and the monastery lost one of its most highly accomplished monks.

Venerable Yan Pei was next to take up abbotship in 1991, followed by Venerable Long Gen in 1994. The fifth Abbot of the Monastery was Venerable Sui Kim, the abbot of Xing Yuan Temple and Hwa Zhang Temple in the Philippines. He died in 2005.