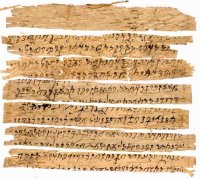 The British Museum scrolls are a collection of Buddhist books found in Afghanistan in the early 1990's and now preserved in the British Museum in London. Written on strips of birch bark and dating from about the 1st century CE, they are the oldest Buddhist texts in existence. The hot damp Indian climate caused the originals and even ancient copies of the Tipitaka to disappear centuries ago. Afghanistan's cold dry climate miraculously preserved these books, thus allowing scholars to verify that the Buddha's discourses as we have them today are substantially the same as those that existed just a few centuries after the Buddha. Some of the suttas included in the scrolls are a selection from the Samyutta Nikaya, Anguttara Nikaya , the Dhammapada, the Itivuttaka and the Sutta Nipata. Included in the collection are also several medical texts.