Difference between revisions of "Buddha and Jesus" 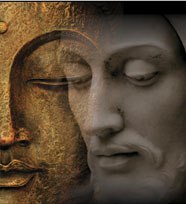 Buddha and Jesus were probably the two most influential figures in history. Their teachings have had a profound and positive effect on the cultures which adopted them. There are also interesting parallels between the two men. Both were homeless wandering teachers and both were skilled in using parables and stories to make their ideas understandable. They each attracted a band of disciples and sent them out to spread their teachings. The Buddha saw himself as the most recent in a line of enlightened Buddhas (S.II,106) and Jesus believed himself to be a successor of the great Jewish prophets of old. But it is in the two men’s ethical vision that we see the most important similarities. Here are just a few of the many things they taught which show their like-mindedness.

The Buddha and Jesus even shared a similar fate after their deaths in that both were eventually deified. On discovering that a certain monk was entranced by his physical appearance, the Buddha admonished him, ‘Why do you want to see this dirty body of mine? See the Dhamma and you will see me.’ (S.III,120) Nonetheless, during the third Council some participants asserted that the Buddha was so perfect that even his faeces was fragrant-smelling. The Saddharmapuṇḍarīka Sūtra, which dates from about the 1st century CE, claims that the Buddha has existed since the beginning of time! When someone addressed Jesus as ‘good teacher’ he immediately corrected them: ‘Why do you call me good? No one is good except God alone’ (Luke 18,19). Disregarding such evidence, within 20 years of Jesus' death Saint Paul was already claiming that he was God incarnate.

But despite these and other similarities, the lives and particularly the teachings of the Buddha and Jesus also differed in many respects. The Buddha was from the ruling-class family while Jesus was born into humble circumstances. Jesus never married; the Buddha was both a husband and a father. Although the Buddha taught everyone his message resonated most with scholars and intellectuals. Jesus directed his message mainly to simple folk. The Buddha lived in a time of relative peace and steered clear of politics, whereas Jesus’ mission was inextricably mixed up with the volatile politics of the day. The Buddha taught for 45 years, Jesus for a mere two or perhaps three.

The two men's understanding of the wider reality has almost nothing in common. The Buddha did not believe in a creator God and Jesus did. For the Buddha, the Absolute was a non-anthropomorphic ‘Unborn, Un-become, Unmade, Un-constructed’ (Ud.80). Jesus saw God as distinctly personal and human-like; he sometimes even addressed him as ‘Abba’, a term of affectionate intimacy equivalent to ‘Daddy’. The Buddha saw his Dhamma as liberating from saṃsāra; Jesus saw his Gospel as saving from hell. Following from this, the Buddha meditated, directing his attention inward to his mind while Jesus prayed, directing his requests outward to God. For Jesus, man’s ultimate goal was to be reborn in the presence of this God, for the Buddha heaven was an end decidedly inferior to Nirvāṇa. The Buddha gave no special attention to his own tribe and taught all clans, castes and classes. Jesus believed he ‘was sent only to the lost sheep of Israel’ (Matthew 10,5-6; 15,24), God’s chosen people. While Jesus believed that God would soon destroy the world in an apocalypse of brimstone and fire (Matthew 10,23; 16,28), the Buddha had little interest in predicting the future and would have found Jesus’ grim prediction rather puzzling. Jesus felt he was justified in sometimes getting extremely angry, especially at those who doubted or scorned his message (Matthew 23,33-35; John 2,). Such ‘righteous indignation’ would have raised eyebrows amongst those who knew the Buddha.

Thus a complete look at these two great teachers reveals intriguing similarities and distinct differences, commonalities and contrasts, both of which need to be acknowledged if we genuinely want to understand these men and the religions they founded. Nonetheless, when Buddhists and Christians meet as friends, their encounters will be more harmonious and fruitful if they remember these words of the Buddha: ‘Those things about which there is no agreement, let us put aside. Those things about which there is agreement let the wise bring up, discuss and examine’ (D.I,164).