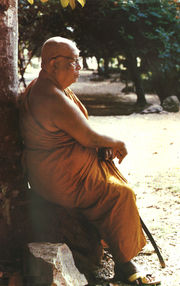 Buddhadasa (1906 - 1993) was one of Thailand’s most prominent modern Buddhist monks. From the 1960’s onward, he challenged the numerous superstitions that infest much of popular Thai Buddhism as well as its stilted and dry interpretation by academics. As a consequence of this he came to be regarded with considerable suspicion by both the government and the ecclesiastical authorities and chose to live in the far south of Thailand where he established a monastery at Suan Mokh. In the last twenty years of his life Buddhadàsa came to be regarded with increasing respect, and now is seen as one of the founders of modern Thai Buddhism.

Buddhadasa, A Buddhist Thinker for the Modern World, Peter Jackson, 1988.