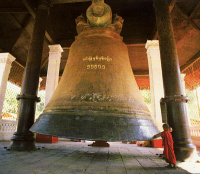 Bells (gandi) and gongs (kamsa) are metal objects struck to make a noise. Whereas a bell is usually hollow a gong is flat. Speaking of patience and non-retaliation, the Buddha asked us to be like a cracked gong (kamsa upahato) that does not react when struck (Dhp.134). In the centuries after the Buddha monasteries in India and elsewhere throughout the Buddhist world always had bells or drums (bheri) to announce the various times for the monks’ activities. The Pali commentaries mention that certain monasteries in Sri Lanka had mechanical devices (yamayanta) that would ring the bell at designated times. A work called the Ghantastotra (2nd–3rd century CE) and attributed to Asvaghosa, is a hymn to the monastery bell ‘which calls the monks to meditation as a mother calls her children.’ Chinese, Korean and Japanese temples often have wooden bells which are struck to the keep time during chanting. These bells have two fish-like or dragon-like creatures carved in them and are called ‘wooden fish’ (Chinese muyu). The largest functioning bell in the world is the Mingun Bell cast in Burma in 1808 and which weighs 90 tons.

Another huge ‘Buddhist’ bell hangs in the Da Tzong Temple in Peking. Called the Great Yongle Bell it was caste in the early 1400s and weighs 46 tones. It also has the whole of a sutra (Saddharmpundarika Sutra) in raised characters, 230,000 altogether, on it’s outer surface.