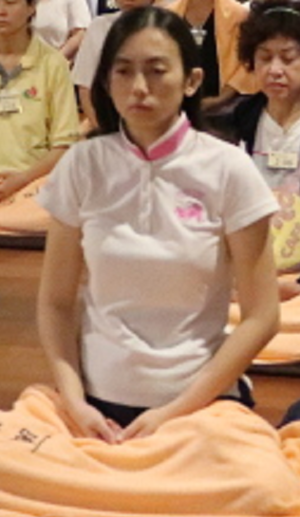 Buddhist at a Chan Buddhist retreat sitting in meditation

Chan spread south to Vietnam as Thiền and north to Korea as Seon, and, in the 13th century, east to Japan as Zen.

The history of Chan in China can be divided into several periods. Chan as we know it today is the result of a long history, with many changes and contingent factors. Each period had different types of Chan, some of which have remained influential, while others vanished.

Ferguson distinguishes three periods from the fifth century into the thirteenth century:

1. The Legendary period, from Bodhidharma in the late 5th century to the end of the An Lushan Rebellion around 765 CE, in the middle of the Tang Dynasty. Little written information is left from this period. The Six Patriarchs, including Bodhidharma and Huineng, were among the first teachers of Chan. The split occurred between the Northern and the Southern School.

2. The Classical period, from the end of the An Lushan Rebellion around 765 CE to the beginning of the Song Dynasty around 950 CE. This is the time of the great masters of Chan, such as Mazu Daoyi and Linji Yixuan, and the creation of the yulu (語錄) genre, the recordings of the sayings and teachings of these great masters.

3. The Literary period, from around 950 to 1250, which spans the era of the Song Dynasty (960–1279). Monks compiled collections of gongan, sayings and deeds by the famous masters, appended with poetry and commentary. This genre reflects the influence of literati on the development of Chan. People from this time idealized the previous period as the "golden age" of Chan, producing the literature that portrays the supposed spontaneity of the celebrated masters.

Signification of Buddhism and Taoist influences

When Buddhism came to China, it was adapted to the Chinese culture and understanding. Theories about the influence of other schools in the evolution of Chan vary widely and heavily reliant upon speculative correlation rather than on written records or histories. Some scholars have argued that Chan developed from the interaction between Mahāyāna Buddhism and Taoism, while others insist that Chan has roots in yogic practices, specifically kammaṭṭhāna, the consideration of objects, and kasiṇa, total fixation of the mind. A number of other conflicting theories exist.

Buddhism was exposed to Confucian and Taoist influences when it came to China. Goddard quotes D.T. Suzuki, calling Chan a "natural evolution of Buddhism under Taoist conditions". Buddhism was first identified to be "a barbarian variant of Taoism", and Taoist terminology was used to express Buddhist doctrines in the oldest translations of Buddhist texts, a practice termed "matching the concepts".

Judging from the reception by the Han of the Hinayana works and from the early commentaries, it appears that Buddhism was being perceived and digested through the medium of religious Daoism (Taoism). Buddha was seen as a foreign immortal who had achieved some form of Daoist nondeath. The Buddhists' mindfulness of the breath was regarded as an extension of Daoist breathing exercises.

The first Buddhist recruits in China were Taoists. They developed high esteem for the newly introduced Buddhist meditational techniques, and blended them with Taoist meditation. Representatives of early Chinese Buddhism like Sengzhao and Tao Sheng were deeply influenced by the Taoist keystone works of Laozi and Zhuangzi. Against this background, especially the Taoist concept of naturalness was inherited by the early Chan disciples: they equated – to some extent – the ineffable Tao and Buddha-nature, and thus, rather than feeling bound to the abstract "wisdom of the sūtras", emphasized Buddha-nature to be found in "everyday" human life, just as the Tao.

Neo-Taoist concepts were taken over in Chinese Buddhism as well. Concepts such as T'i-yung (體用 Essence and Function) and Li-shih (理事 Noumenon and Phenomenon, or Principle and Practice) were first taken over by Hua-yen Buddhism, which consequently influenced Chan deeply. On the other hand, Taoists at first misunderstood sunyata to be akin to the Taoist non-being.

The emerging Chinese Buddhism nevertheless had to compete with Taoism and Confucianism:

Because Buddhism was a foreign influence, however, and everything "barbarian" was suspect, certain Chinese critics were jolted out of complacency by the spread of the dharma. In the first four centuries of the Common Era, this barbarian influence was infiltrating China just when it was least politically stable and more vulnerable to sedition. As the philosophy and practice infiltrated society, many traditionalists banded together to stop the foreign influence, not so much out of intolerance (an attitude flatly rejected by both Taoism and Confucianism), but because they felt that the Chinese world view was being turned upside down.

When Buddhism came to China, there were three divisions of training:

It was in this context that Buddhism entered into Chinese culture. Three types of teachers with expertise in each training practice developed:

Monasteries and practice centers were created that tended to focus on either the Vinaya and training of monks or the teachings focused on one scripture or a small group of texts. Dhyāna (Chan) masters tended to practice in solitary hermitages, or to be associated with vinaya training monasteries or the dharma teaching centers. The later naming of the Zen school has its origins in this view of the threefold division of training.