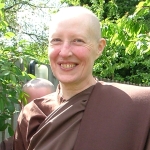 Sister Chandasara (Louise Stack) was born in 1954 in Johannesburg, South Africa, and grew up in a Christian family. She was involved in revolutionary politics in exile in her twenties and later worked as a political researcher and analyst at the Centre for Policy Studies in Johannesburg for 14 years before coming to Amaravati in 2002, and ordaining as a siladhara in 2006. She has a BA (Hons) in African Politics and an MA in Linguistics (Semantics). Her lifelong quest has been, and continues to be, liberation and learning how to love unconditionally.