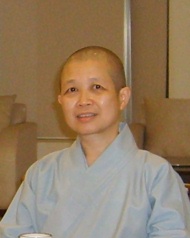 Bhiksuni Chao-hwei Shih was born in Yangon City, Burma in 1965. She moved to Taiwan when she was 8 years old. She completed high school with honors and was the valedictorian of her class. She attended Taiwan International Normal University and ordained.

Bhiksuni Chao-hwei Shih began to teach Chinese and Buddhism in various colleges and also Religious Studies at Hsuan Chuang University, where she is currently a professor.

In 2004 she founded a Research Center for Applied Ethics. And now serves as the Dean of Graduate Studies at Hong Shih Buddhist College . A leader of social movements at the national level she promotes Kwan Yin statues, and Vesakha Day as a public holiday. As founder of the Life Conservationist Association, she lobbies for animal rights legislation, and is the author of numerous manuscripts on Nature Conservation.

Bhiksuni Chao-hwei Shih lobbied His Holiness the Dalai Lama of Tibet for the full ordination of women monastics of the Vajrayana lineage, and she organized an event to formally Abolish the 8 Garudhammas, gathering the four fold Sangha to participate.

An author of 25 books and over 40 research papers, Bhiksuni Chao-hwei Shih received the 48th Chinese Literature and Arts Medal.