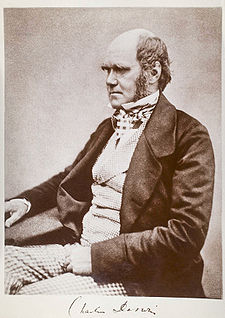 Charles Robert Darwin (February 12, 1809 – April 19, 1882) was an English naturalist who realized and demonstrated that all species of life have evolved over time from common ancestors through the process he called natural selection. The fact that evolution occurs became accepted by the scientific community and much of the general public in his lifetime, while his theory of natural selection came to be widely seen as the primary explanation of the process of evolution in the 1930s, and now forms the basis of modern evolutionary theory. In modified form, Darwin’s scientific discovery is the unifying theory of the life sciences, providing logical explanation for the diversity of life.

At Edinburgh University Darwin neglected medical studies to investigate marine invertebrates, then the University of Cambridge encouraged a passion for natural science. His five year voyage on HMS Beagle established him as an eminent geologist whose observations and theories supported Charles Lyell’s uniformitarian ideas, and publication of his journal of the voyage made him famous as a popular author. Puzzled by the geographical distribution of wildlife and fossils he collected on the voyage, Darwin investigated the transmutation of species and conceived his theory of natural selection in 1838. Although he discussed his ideas with several naturalists, he needed time for extensive research and his geological work had priority. He was writing up his theory in 1858 when Alfred Russel Wallace sent him an essay which described the same idea, prompting immediate joint publication of both of their theories.

His 1859 book On the Origin of Species established evolutionary descent with modification as the dominant scientific explanation of diversification in nature. He examined human evolution and sexual selection in The Descent of Man, and Selection in Relation to Sex, followed by The Expression of the Emotions in Man and Animals. His research on plants was published in a series of books, and in his final book, he examined earthworms and their effect on soil.

In recognition of Darwin’s pre-eminence, he was one of only five 19th century UK non-royal personages to be honored by a state funeral, and was buried in Westminster Abbey, close to John Herschel and Isaac Newton.

The “Lady Hope Story”, published in 1915, claimed that Darwin had reverted back to Christianity on his sickbed. The claims were refuted by Darwin's children and have been dismissed as false by historians. His last words were to his family, telling Emma "I am not the least afraid of death – Remember what a good wife you have been to me – Tell all my children to remember how good they have been to me", then as she laid down for a rest, he repeatedly told Henrietta and Francis "It's almost worth while to be sick to be nursed by you."

Charles Darwin may have been a vegetarian. In his books he described how the early humans were vegetarian (mostly frugivorous) and is quoted saying, "There is no fundamental difference between man and the higher mammals in their mental faculties ... The difference in mind between man and the higher animals, great as it is, certainly is one of degree and not of kind . . The love for all living creatures is the most noble attribute of man."

Darwin was not a Buddhist (he was atheist and/or agnostic), but his theories, which would later be shown to be true beyond any reasonable doubt, are highly compatible with Buddhism and in fact Buddhism contains some suttas (discourses) which suggest biological evolution for the changes in species, including humans.