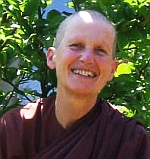 Sister Cittapala was born in Germany in 1949, she worked for nearly 20 years as a teacher and artist in Hamburg. In 1990/91 she went to Indonesia to study awareness movement (Amerta Movement, The River of Life) with Suprapto Suryodharmo, a practice which connected her more and more with Buddhism. After meeting Luang Por Sumedho in 1994, she felt so supported by his teachings that she came to Amaravati, where she has been living since 1996. In 1999, she asked for Sīladhāra ordination.

Here she is supporting the community and is involved in family activties, especially exploring ways of practice and teaching which use formal meditation as well as painting and movement, for liberation.