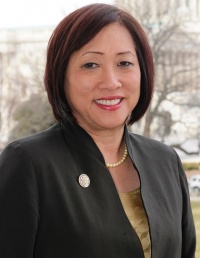 Colleen Wakako Hanabusa (Japanese: 花房若子 Hepburn: Hanabusa Wakako, born May 4, 1951) is an American politician who has served as the U.S. Representative for Hawaii's 1st congressional district since January 2011. She is a member of the Democratic Party. Before her election to the U.S. House of Representatives, Hanabusa was a member of the Hawaii Senate, representing the 21st District beginning in 1998. She served as the Senate Majority Leader before being elected Hawaii's first woman President of the Senate in 2006. On August 24, 2011, she announced her intention to run for reelection to Congress.

On December 17, 2012, after the death of Senator Daniel Inouye of Hawaii, it was announced that Inouye had sent a letter shortly before his death to the Governor of Hawaii, Neil Abercrombie, stating his desire that Hanabusa be appointed to his seat. Abercrombie decided against appointing Hanabusa and chose Lieutenant Governor of Hawaii Brian Schatz instead. Hanabusa has announced a Democratic primary challenge to the incumbent Schatz in the 2014 special election. Irene Hirano Inouye, the widow of Senator Inouye, has endorsed Hanabusa.

A fourth-generation American of Japanese ancestry, Colleen Hanabusa grew up in Waiʻanae with her two younger brothers, her parents, and her grandparents. In 1969 she graduated from St. Andrew's Priory. She received a B.A. in economics and sociology in 1973 and an M.A. in sociology in 1975 from the University of Hawai'i and in 1977 received a J.D. from the University of Hawai'i's William S. Richardson School of Law.

Hanabusa is the third Buddhist to join the United States Congress, the others being Hank Johnson of Georgia and Mazie Hirono of Hawaii. Hanabusa's election makes Hawaii the only state with a majority non-Christian House delegation. She is a member of the New Democrat Coalition.