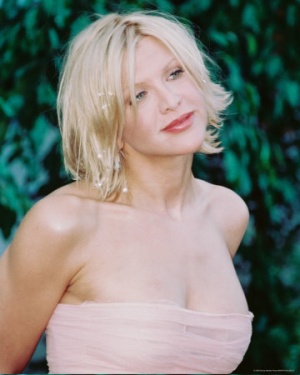 Courtney Michelle Love (born Courtney Michelle Harrison on July 9, 1964) is an American rock musician and actress. Love is known as lead singer and lyricist for the alternative rock band Hole and for her two-year marriage to the late Nirvana singer/guitarist Kurt Cobain.

Love’s mother Linda Carroll was adopted by an Italian-American couple at birth, retaining no contact with her birth father or her birth mother, who she discovered was the children’s writer Paula Fox. Carroll's autobiography Her Mother’s Daughter, in 2006, told of her relationship with both adoptive mother and elder daughter.

Conflicting news began to appear in August 2003 regarding Love’s family tree, some remarking that Love’s mother had taken DNA tests that proved that Carroll’s father was Marlon Brando. The reports implied this disclosure would appear in Carroll’s memoir. Later that month, Carroll’s publisher, Doubleday, told the New York Daily News, “There was nothing in Linda Carroll’s book proposal about Marlon Brando, nor will there be anything in the book about him. I’ve spoken to her and she has told me that there is no truth to the suggestion that she is related to Marlon Brando."