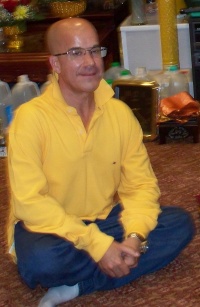 David N. Snyder, Ph.D. (1962- ) is a bestselling Buddhist writer primarily writing and teaching from the Theravada school of Buddhism. He is also founder of Vipassana Foundation and Dhamma Wiki.

On The Four Noble Truths

On meditation and full lotus posture

On the modern trend toward atheism, physicalism or materialism

We have gone to the moon, built missiles and warheads capable of mass destruction and other very high technological advances, but we can't even duplicate a simple tiny gnat.

There appears to be something more to mere material of a being, otherwise material should be able to be replicated and make a new life, without using anyone's DNA, seed, egg or other biological material.

On the many different schools of Buddhism

General comments and thoughts regarding Buddhism