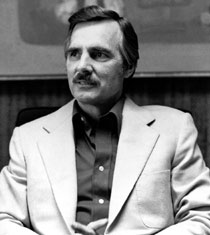 William Dennis Weaver (June 4, 1924 – February 24, 2006) was an Emmy Award-winning American actor, best known for his work in television, including roles on Gunsmoke, as Marshal Sam McCloud on the NBC police drama McCloud and in Steven Spielberg's feature-length directorial debut, the cult TV movie Duel in 1971.

Weaver had been a vegetarian since 1958 and student of yoga and meditation since the 1960s. He was also renowned as an environmentalist, promoting eating lower on the food chain, alternate fuels such as hydrogen and wind power through an educational organization he founded, The Institute of Ecolonomics (a neologism formed by combining "ecology" and "economics"). He was also involved with John Denver's WindStar Foundation. He founded an organisation called Love is Feeding Everyone which provided food for 150,000 needy people a week in Los Angeles.

Weaver was active in progressive political causes. He used his celebrity status in instrumental roles as a fundraiser and organizer for George McGovern's campaign for president in 1972.

In 2004, he led a fleet of alternative fuel vehicles across America in order to raise awareness about America's dependence on oil.

The “Earth Ship,” the personal home he commissioned architect Michael Reynolds to design and build in Ridgway, Colorado during the late 1980s, incorporated recycled materials in its construction and featured advanced eco-technologies.

Weaver was consistently involved with the annual Genesis Awards, which were created by The Ark Trust to honor those in the media who bring attention to the plight and suffering of animals.

"There will come a time … when civilized people will look back in horror on our generation and the ones that preceded it: the idea that we should eat other living things running around on four legs, that we should raise them just for the purpose of killing them! The people of the future will say “meat-eaters!” in disgust and regard us in the same way we regard cannibals and cannibalism" Dennis Weaver